You can see the location of Tanzania on the world map below:

The neighboring countries of Tanzania (TZ) are:

Tanzania borders with the Indian Ocean. 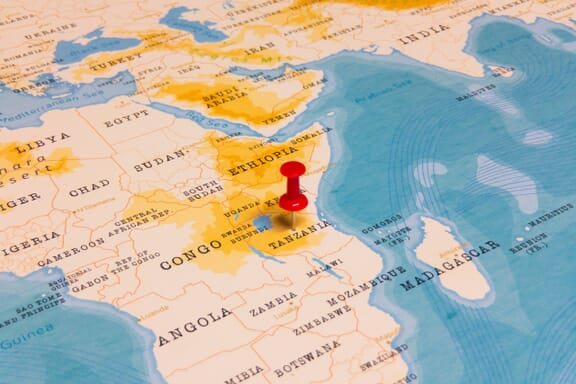 Here are the largest cities in Tanzania based on 2021 population data:

Map of Tanzania with the Largest Cities

Other Countries in the Region

Tanzania has 7 important sites currently registered with UNESCO including a mix of natural and cultural:

There is also 5 important sites currently under consideration including Gombe National Park, and The Central Slave and Ivory Trade Route.

Tanzania has a varied transport system that caters for tourists and those wishing to explore the national parks. The predominant transport method is the road, followed by the Tanzanian rail network. Trunk roads connect the main cities in this country such as Dodoma, Dar es Salaam, and Tanga. These roads, and regional roads, are managed by the Ministry of Works, Transport, and Communication.

Railways are mainly commercial and used for freight transport. These are maintained by two companies – TRC, and TAZARA.

For travelers, the international airport is located in Da es Salaam and accommodates 2.3 million passengers per year. The Julius Nyerere International Airport facilitates international flights from airlines including KLM, Qatar Airways, and Emirates.

As you can see from the Tanzania map with regions, this country has diverse geography – this means there is an abundance of natural tourist attractions. Tourists usually visit Tanzania to travel through the Serengeti and spot big game wildlife. Alternatively, the other popular spot is the island of Zanzibar which has some amazing beaches and cultural history.

Two Masai walk along a beach in Zanzibar

If you love nature, and the great outdoors, popular natural attractions include [6]:

Each of these locations offers an abundance of wildlife – from elephants and giraffes to thousands of flamingos and zebras. Guided safaris through the national parks offer breathtaking scenery and an unfiltered look at mother nature.

Circulation of the Tanzanian Shilling is controlled by the Central Bank of Tanzania – it was first used as the national currency in 1966 and replaced the East African Shilling.

Tanzania is officially recognized as the United Republic of Tanzania. The country’s current constitution was adopted in 1977 – it specifies the single-party government structure and the idea of a strong president.

In terms of leadership, Tanzania has a Chief of State who is also Head of the Government. The functional government is split into three main branches – executive, judicial, and legislative. A president is elected by the public; they then appoint judicial staff. Tanzania also has a National Assembly with 239 voted members from different constituencies.

This country is split into different administrative divisions – regions, districts, divisions, and finally local wards. Tanzania has the following:

There are multiple divisions and wards and their administrative size can vary depending on the region. The original regions of Tanzania were formed under British rule, but have since been changed.

In terms of economy, Tanzania has a developing system that is mainly dependent on agriculture. The agricultural industry accounts for approximately 50% of the nation’s employed population. In the world stage, Tanzania has a GDP rank of 74/196. Moreover, it has a positive GDP growth of +7.2%. Aside from agriculture, other main industries include salt production and mining. The mining industry is hugely important and Tanzania is one of the main exporters of gold in Africa.

As shown in the detailed political map of Tanzania above, it borders 8 African countries – Mozambique, Malawi, and Zambia in the south. The Democratic Republic of Congo, Burundi, and Rwanda in the west, and Uganda and Kenya in the north.

Its east coast is located on the Indian Ocean and is north of Madagascar. Along the east coast, Tanzania has many small to medium-sized islands – the largest of which is Zanzibar. Zanzibar is a popular tourist location and a main economic hub. Other notable islands include Mafia Island and Pemba Island.

In terms of physical geography, Tanzania has several distinct regions:

You can also see from the Tanzania map, that it has several borders on some of the largest lakes in Africa including Lake Victoria, and Lake Malawi. Moreover, the Ngorongoro Crater is classed as the world’s biggest caldera, spanning an area of 265 square km.

What Tanzania is famous for?

The first thing that most people think of when considering Tanzania is Mount Kilimanjaro – it is an impressive sight and one of the most noteworthy mountains in the world.

Is Tanzania a safe country?

Tanzania is relatively safe compared to some other African countries [5]. As with traveling anywhere, exercise common sense and keep your belongings out of sight when walking through big cities. It is also advisable to avoid isolated beaches at night and to take taxis for public transportation at night.

Where is Tanzania located?

East Africa – bordering 8 other African countries and the Indian Ocean.

What are the current issues in Tanzania?

The main issues the population of Tanzania currently faces is inequality and poverty – there is a divide in quality of life where some live in poverty, and others have a great quality of life.