Burkina Faso is located in the Northern Africa region at latitude 12.238333 and longitude -1.561593 and is part of the African continent.

You can see the location of Burkina Faso on the world map below:

The neighboring countries of Burkina Faso (BF) are:

Burkina Faso is a landlocked country, which means it does not have direct access to the open ocean. 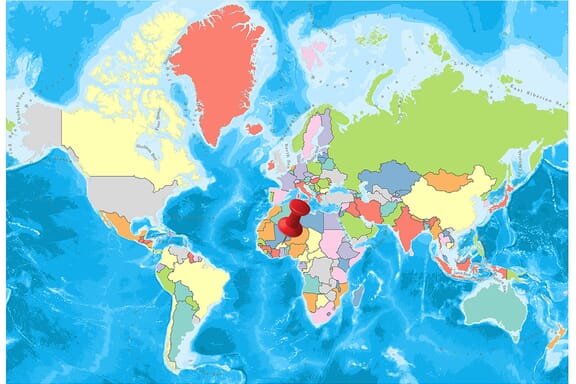 Here are the largest cities in Burkina Faso based on 2021 population data:

Map of Burkina Faso with the Largest Cities

Burkina Faso is located to the north of Ghana in West Africa, south of the Sahara desert. Its surface area is 274,200 km².

The borders and their length of Burkina Faso are:

Most of the country consists of a large plateau covered with a lateritic rock layer dominated by eroded heights. Sandstone plateaus in the southwest are bounded by Banfora rocks.

Burkina Faso is governed by a multi-party democratic republican regime. The head of state is the president and the head of the government is the prime minister. The legislative power is in the 107-member parliament. Members of Parliament are elected by free general elections.

The long-lasting resistance of Islam across the country has been broken as a result of King Moogo Naaba Doulgou’s choice of Islam and an increase in the proportion of those who maintain their lives according to Islamic beliefs throughout the country.

Islam is the dominant religion in the country today, 60.5% of the population lives according to this belief. The percentage of those who believe in the Christian religion is 23.2%, while the proportion of Christians belonging to the Catholic sect is 19% and that of the Protestant sect is 4.2%.

Burkina Faso is one of the poorest countries in Africa. It has a high population density, a small number of natural resources and a weak soil. The majority of the population is engaged in agriculture.

The industry is dominated by unprofitable state-controlled institutions. After the devaluation of the African Franc in January 1994, the government renewed its development program with international agencies and increased exports and economic growth.

The conservation of the country’s macroeconomic development depends on low inflation, the downturn in the trade deficit and the continuation of reforms to promote private investment.

In these regions, the gray tombs, known as the people who tell the oral history and traditions of the tribes from generation to generation, play an important role. These people can also take part in the celebration and entertainment as a singer and dancer.

Handicrafts also have an important place throughout the country, and pottery, basket making, and bronze woodworking are often handicrafts.

Burkina Faso is the national football team representing Burkina Faso in the international arena. In the tournament the team first joined in 1978, it was not able to show the success of staying in the finals and was always eliminated.