Liberia is located in the Northern Africa region at latitude 6.428055 and longitude -9.429499 and is part of the African continent.

You can see the location of Liberia on the world map below:

The neighboring countries of Liberia (LR) are: 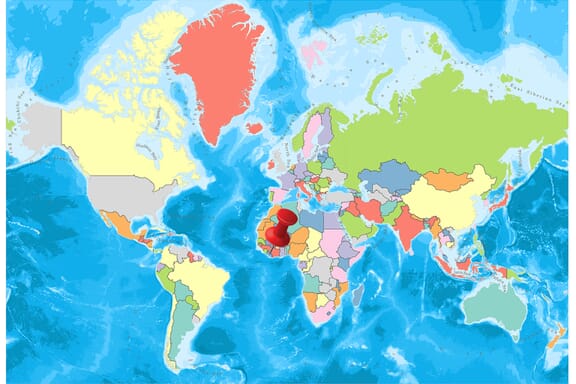 Here are the largest cities in Liberia based on 2021 population data:

Map of Liberia with the Largest Cities

Liberia is the only non-colonized country in Africa and the oldest republic in the continent. The country’s population is divided into tribal people and Liberians.

The capital, Monvoria, is one of the highly developed cities of the country in trade and tourism.

It is located on the coast of the North Atlantic Ocean in West Africa. It is surrounded by Sierra Leone in the northwest, Guinea in the north, and Ivory Coast in the east.

The lagoons, marshes and rocky cliffs along the sandy and low coastline of Liberia, which is a very complex surface pattern, extend along the coastline of approximately 560 km.

Slightly uneven hills behind this section, which has a width of 23-40 km, rise suddenly and leave their place to a narrow forest zone.

Its average height is 180-300 m, followed by a plateau where the forest cover becomes rare. The height of this plateau divided by valleys varies between 450-650 m.

The northern part of Liberia is mountainous. Hills are rising to 1,350 meters. Nimba Mountains, the highest point of this region, reaches 1,381 m at the Guest House Hill on the Guinea border.

The Mano and Moro rivers originating from the mountainous region flow in the southwest direction to the Atlantic Ocean. A part of the Cavalla River, which forms the border of the Ivory Coast, is accessible. Other important rivers are Lofa, St. Paul, St. John, and Cestos. The dam built on the St. Paul River, 27 km northeast of the capital, is an important hydroelectric source.

The granite, schist and gneissic rock layers at the base of the country are intensely curled and broken. Itabirit formations which contain iron are inserted between these layers. Sandstone beds extend along the coast. It forms the dominant soil texture and thin lateritic soils that allow more trees to grow.

There are also dwarf hippos and some anteater species. Elephants, wild buffalo, and pars are increasingly eliminated. The presence of reptiles is rich. The main snake species are black cobra and viper. Three different types of crocodiles were identified.

The Liberian constitution in 1847 resembles the constitution of the United States. A president, a Senate and a legislative body consisting of representatives and constitutional courts share the powers of the national government.

The climate is particularly hot and humid throughout the year in the coastal area. The precipitation season lasts from May to October and the dry season from November to April.

Dusty and dry desert winds, which are known from the Sahara to the shore and known as harmattan, affect the climate in December.

The majority of the population is Protestant and Catholic.

The Liberian economy is based on agriculture and forestry. Plants such as rice, banana, and cassava are grown for domestic consumption in the country.

The government encourages the cultivation of crops such as coffee, cocoa, dates, citrus fruits, and colasca for sale in world markets.

Furthermore, Liberia’s most valuable product in agriculture exports is rubber, which takes second place after demers among the goods sold to the outside.