Egypt is located in the Northern Africa region at latitude 26.820553 and longitude 30.802498 and is part of the African continent.

You can see the location of Egypt on the world map below:

The neighboring countries of Egypt (EG) are:

Egypt borders with the Mediterranean Sea and the Red Sea. 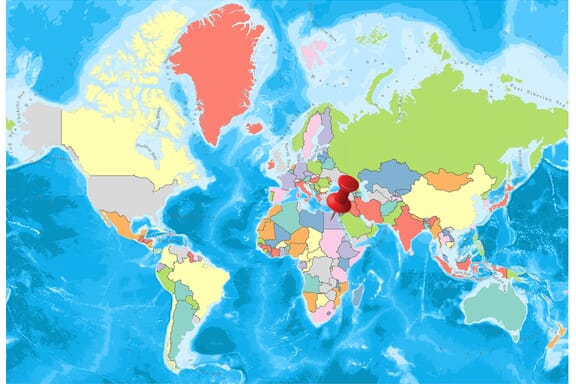 Here are the largest cities in Egypt based on 2021 population data:

Map of Egypt with the Largest Cities

Known for its pyramids and deeply rooted history, Egypt has a 7,000-year history. One of the seven wonders of the world, the Pyramid of Keops is located in Egypt.

The capital city Cairo is the Arab world’s and Africa’s largest city. It is the heart of the country in terms of artistic, tourist and cultural aspects. The official language is Arabic.

It is located in North Africa. It is neighboring to Libya in the west, and neighbor to Sudan in the south. The part of the country which is located on the Asian peninsula is a neighbor to Palestine and Israel through the Sinai Peninsula. The Nile River, which passes through Egypt, flows into the Mediterranean.

Egypt or the country of Pyramids occupies the northeastern tip of Africa right off the continental border with Asia with its Sinai Peninsula (the latter takes 6% of the mainland).

Egypt is washed by the Mediterranean to the north and the Red Sea to the east. Spread over 1,010 408 km2, Egypt ranks Africa’s 3rd and the world’s 13th most populous country with about 99 million population as of 2019.

Mount Katerina, the highest place on the peninsula of Sina, is 2,637 meters. The most important stream is the Nile river. Only 4% of the land is farmland. An important part of the land suitable for agriculture is in the valley of the Nile.

Due to geographical and natural conditions Egypt happens to be widely inhabited across its capital, Cairo, northeastern Alexandria and the Nile Delta, while the rest of the country is mainly taken by deserts.

91% of the country’s population consists of Egyptians coexisting with the minorities of Turks, Greeks, Bedouin Arabs, etc. Egyptian Arabic is Egypt’s national language.

Being one of the founding members of UN, Arab League and African Union with the leading economy following Nigeria as of 2016 and the 40th GDP worldwide, Egypt hosts 5 million immigrants and refugees from Sudan, Iraq, Syria and other countries.

Egypt is apparently governed by a multi-party democratic system. The country is governed by the constitution enacted on September 11, 1971. The President is elected by a general election.

The prime minister is appointed by the president. The 454-member parliament has legislative power.

The official religion is Islam. 91% of the people are Muslim. Furthermore, the rest of the population is composed of Orthodox Christians of the same origin (they have a different conviction from the other orthodox), Orthodox Greek origin, Maronite Christians of Arab origin, and Catholic and Protestant Christians who have settled in Egypt from various European countries. Almost all the Muslims are Sunnis, the majority are Shafii, and a significant number are Hanafis.

The Egyptian economy is based on agriculture, animal husbandry, and tourism. Agriculture is mostly done in the Nile valley. The share of income from agricultural products and animal husbandry in the gross domestic product is 20%. 40% of the working population work in these sectors.

Cotton is at the head of the agricultural products. Besides this, cereals and various vegetables are also important products. Fishing is also common.

In Egypt, there is the extraction of some minerals such as iron, phosphate, manganese, zinc, and gold. Mine revenues constitute 2% of gross domestic product. Oil is another industrial product in Egypt. There is also the utilization of forest products in some areas.

Egypt is a country rich in history. In Cairo, there are many antique and Islamic artifacts. All these historical riches attract numerous tourists to Egypt. Tourism income covers some of the deficiencies in foreign trade. Because of its 7,000 year history, Egypt attracts millions of tourists every year.

Egypt is currently ranked among the 10 richest Arab nations.

To understand the art of Ancient Egypt, it is necessary to think with an ancient Egyptian point of view.

When Egyptian paintings and sculptures are compared to the static, generally abstract, and generally chunky structure of the paintings, and to the naturalistic nature of Greek or Renaissance art in the later periods, we sometimes see Egyptian paintings unfairly criticized. However, the art of painting in Egypt served a very different purpose than the civilizations of the later periods.

Today, we look at the glorious treasures found in the grave of Tutankhamun, the magnificent reliefs of the New Kingdom graves, the amazement and admiration of the peaceful beauty of the ancient Kingdom sculptures. However, we must remember that none of these works were made to be seen. The aim was not to look at the works.

Having its origins back in the 6-4th millenniums BCE, Egypt’s history is rich in the local kingdoms and dynasties ruling the country from 3150 BCE to 1070 BCE with various foreign dominations (Libyan, Nubian, Assyrian) in between.

The 6th century BCE was marked by the Achaemenid Persians taking Egypt and becoming the unique foreign rulers aptly named pharaohs after the defeat of the 30th and the last Egyptian dynasty in 343 BCE.

With the ever-growing powers of Alexander the Great, Egypt soon fell under the Ptolemic dominion with Alexandria being the main Hellenistic culture and trade center.

Later centuries witnessed Romans and the Byzantine Empire in charge of Egypt until the Arabs joined the land to their world in the 7th century. Cairo (built in 986) and the whole Islamized Egypt was under the control of the Ottoman Turks and the British powers before gaining independence in 1922. Egypt was declared a republic as a result of the 1952 revolution.

Art and Culture in Egypt

Egypt’s capital and the largest economic and cultural hub Cairo is home to 9 million residents. Alexandria and Giza follow with around 5 and 4 million inhabitants relatively. Egypt is the cultural bellwether of the Arabic world with the highest concentration of historical monuments on its premises.

Although counting various alien influences, Egypt’s culture attracts visitors with its long-standing unique national image. The three millenniums saw Egyptians nurturing the cult of their pharaohs and building imposing stone constructions or the only survivors of the world’s seven wonders.

Somewhere in the middle of the Nile and Cairo the Pyramids emerge. The complex comprises the memorial tombs of the Fourth Dynasty pharaohs: Cheops, Khafre and Menkaure and attracts millions of international visitors to Giza plateau.

The pyramids are escorted by the Great Sphinx to the east. The entire site has been in charge of the astronomical symbolism other than its direct sacred function.

Luxor and Karnak – The two huge complexes spanning over a hundred hectares in southern Egypt fall behind the pyramids in their importance and tourist influx. The Middle and New Kingdom temples, chapels and pylons coupled with the valleys of the kings and the queens have been commemorating the principal place for worship throughout the centuries.

Cairo and Alexandria – the largest urban and economic hubs of Egypt entail a significant cultural legacy. While the capital welcomes visitors with many monuments reflecting the Ottoman rule (the Muhhamad Ali Mosque, the Egyptian Museum, etc.), Alexandria is the best source for the Greek and Islamic cultural fusion over the centuries (Greco-Roman landmarks, Quitbay Citadel, Bibliotheca Alexandria).

Regardless of the political and social turmoil strengthened in 2011, Egypt is mostly safe for tourists. The major urban areas hand-in-hand with the key tourist zones of Sharm El Sheikh and Hurghada making way for the Red Sea biodiversity are open to 8 million travelers year-round and counting.