Djibouti is located in the Northern Africa region at latitude 11.825138 and longitude 42.590275 and is part of the African continent.

You can see the location of Djibouti on the world map below:

The neighboring countries of Djibouti (DJ) are:

Djibouti borders with the Red Sea and the Gulf of Aden. 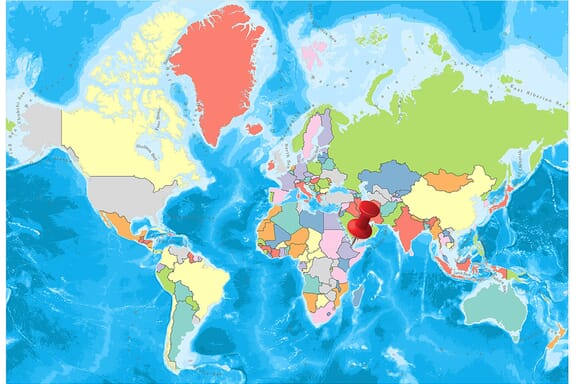 Here are the largest cities in Djibouti based on 2021 population data:

Map of Djibouti with the Largest Cities

Its official name is the Republic of Djibouti. A small country in East Africa. Neighbors are Eritrea in the north, Ethiopia in the west and south, Somalia in the southeast.

There is a coast to the Red Sea and the Gulf of Aden. It is 20 kilometers away from Yemen on the Arabian Peninsula. Djibouti is divided into 6 regions and the capital city is also called Djibouti.

Although Djibouti has a small surface area of 23,200 km², it has three different physical structures. The coastal zone and the high plateau region distinguish the mountainous region with the highest point of 1500 m.

The plateau region is divided by deep valleys. There are two lakes on Hanle Plain, which appear to have been a result of a collapse in Djibouti, where the rivers do not exist. The lakes called Alalı and Assal are the salt lake, of which the Assal is 150 meters below the sea level.

In Djibouti, a seemingly multi-party democratic system prevails. However, the administration restricted political freedoms to a great extent. 51% of the people did not participate in the general elections held in December 1992 on the grounds that it was not fair. The ruling party won 75% of the vote and won all the members in parliament.

The present constitution was put into force on 4 September 1992.

The legal system consists of the mix of Islamic law, the French Civil Code and Djibouti peoples’ tradition.

Djibouti has no official religion. However, 94.5% of the population is Muslim. Muslims are Sunni Shafi’i. The majority of the remaining population consists of Christians of European origin. There are a few Afar people who maintain their traditional religions.

Djibouti’s economy is mostly based on trade and revenues from transport services. The railroad from Djibouti to Addis Ababa gives importance to the port of Djibouti.

A quarter of the Djibouti people live with nomadic livestock. Therefore, the livestock sector is good. According to the figures of 1992, there are 180 thousand cattle and 450 thousand sheep in the country. Some of the people living on the coast are living with fishing. But fishing is not good.

In 1991, 400 tons of fish and seafood were hunted. Management is trying to develop the fishing industry. Fish production currently only covers domestic consumption.

The War of Ogaden, which took place between Ethiopia and Somalia in 1977 – 78, significantly affected the economy of Djibouti.