Eritrea is located in the Northern Africa region at latitude 15.179384 and longitude 39.782334 and is part of the African continent.

You can see the location of Eritrea on the world map below:

The neighboring countries of Eritrea (ER) are:

Eritrea borders with the Red Sea. 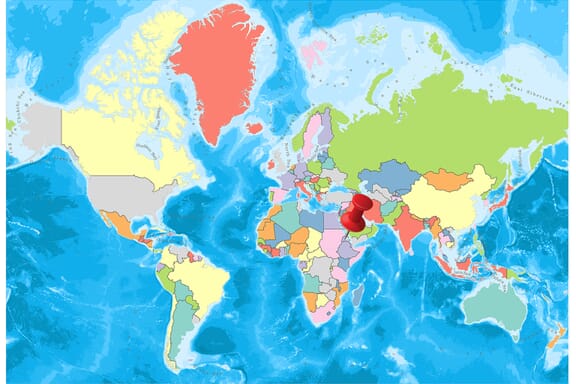 Here are the largest cities in Eritrea based on 2021 population data:

Map of Eritrea with the Largest Cities

Eritrea is surrounded by Sudan in the west, Ethiopia in the south and Djibouti in the southeast. The east and northeast of the country extend along the coast of the Red Sea. It is located directly opposite Saudi Arabia and Yemen.

The Eritrean territory extends for about 950 km from Kasar Cape to the Dumeira Cape in the Bab-el-Mandeb Strait. The Dahlak Islands also belong to Eritrea. The northern extension of the Ethiopian high plateau, surrounded by low plains in the east and west, enters the Eritrean territory.

The eastern plain is about 16-80 km wide and covers the Danakil region and the northern edge of the Kobar Pit, which is 116 m below sea level. The plateau with a gentle slope in the west is fragmented by stream valleys that flow westward.

Eritrea is the State with a one-party system called the People’s Justice and Democracy Party (PFDJ). Even if the multi-party policy was adopted by 1997 laws, there is no other political group for the organization. The chair of the 150 parliamentary seats, of which 75 were the candidates of the EPLF guerrilla members and more or less opposed to the regime, were shaped by Isaias Afewerki, the “elected” president, shortly after the independence of 1993. The structure was never announced by the head of the provisional government.

National elections were scheduled at the time and canceled; it never occupied the country’s agenda. The independent local resources of political advisers of Eritrean domestic politicians are scarce.

In September 2001, the government closed all its national media outlets and those who publicly criticized were arrested.

Eritrea has a tropical monsoon climate. Eritrea, which is similar to the Ethiopian climate, has a more temperate and rainier climate than Ethiopia. The country’s climate varies in high areas and low areas.

The most popular sports in Eritrea are football and cycling. In the following years, Eritrean athletes are exhibiting in international competitions.

Almost the only bike race on the African continent is a race from Massawa’s hot desert beaches to the winding high cliff mountains, from there to the valleys and steep cliffs, then to the capital Asmara. From there, it continues down to Gash-Barka Region plains. Going back to Asmara is only from the south. In this long-distance, very popular sport in Eritrea, fans (spectators) form long queues throughout the race. Zersenay Tadesse and Mebrahtom (Meb) Keflezighi can be shown as the best athletes in the long-distance run in Eritrea. Both are Olympic.