Gabon is located in the Northern Africa region at latitude -0.803689 and longitude 11.609444 and is part of the African continent.

You can see the location of Gabon on the world map below:

The neighboring countries of Gabon (GA) are: 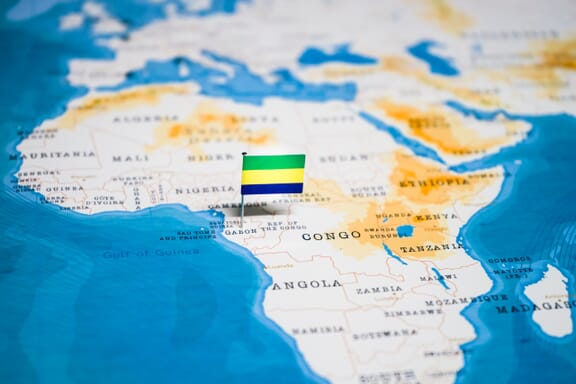 Here are the largest cities in Gabon based on 2021 population data:

Map of Gabon with the Largest Cities

The name of Gabon in the middle of the African continent comes from the word gabão, which means “hat” in Portuguese. Gabon, with an area of 267,667 square kilometers, which he named after the Portuguese sailors likened hats, declared his independence in 1960.

The country is surrounded by many rivers as well as its natural beauties, white sandy beaches, and wildlife. There are 777 different species of birds known in the rainforest of the country, which has a rich nature life. Gabon is also home to 80 percent of the gorillas in the world.

Gabon is a small country on the west coast of Central Africa and is located on the equator, is surrounded by Equatorial Guinea in the northwest, Cameroon in the north, the Republic of Congo in the east and south of and Gulf Guinea in the west.

Ogowe, which is the largest river in the country, has a total length of 1,200 km. The river which flows from its source in the Republic of Congo and flows towards Gabon forms a delta at the point where it joins the Atlantic Ocean in the Gulf of Guinea in the west of the country.

Iboundji Mountain, which has a height of 1.575 m, is accepted as the highest point of the country. The major elevations in the northeast and south of the country are 1,000 m above sea level.

Ancient rocks are dating back to the Proterozoic Periods, which are approximately two billion years before today, in different regions of Gabon. In these rocks, fossils belonging to very ancient periods and natural nuclear reactors which are the most famous oklo were found.

The Republic of Gabon is a republic managed by the constitution. The current constitution was adopted on 28 March 1991 and put into force. The country has a multi-party political system and is governed by the presidential system. The country’s president is elected for a period of seven years. With the amendment made in 2003, an unlimited number of candidates can be elected to the presidency. At the beginning of the government, the prime minister is appointed by the head of state.

Equatorial climate is seen in Gabon, the equatorial country on the Atlantic coast. Due to the humid tropical climate conditions throughout the country, the country is hot in all seasons. The hottest days are the month of January and the driest period between June and September.

In Gabon, where rainfall increases as it approaches the shore, it is very wet between December and January.

In addition, animism is widespread in the country where people of Islam and Bwiti faith live in the country. 5 percent of the country’s population defines itself as an atheist.

Gabon is a country rich in natural resources. Oil, magnesium, iron, gold, and uranium reserves are numerous in the country. Besides, although the country with large forests is considered to be one of the richest countries of the African continent, one-third of the population lives below the hunger limit.

Most of the agricultural activities in the country aim to meet personal needs. The most produced and exported agricultural products are coffee, cocoa, rubber, palm tree oil and sugar.

In Gabon, music and dance performed in local languages constitute an important part of culture. Special days and hunting masks are made in different ways. In addition to handicrafts and masks that are revealed by individuals belonging to Fang ethnic group, baskets, carvings and sculptures are produced.

One of the most popular sports in Gabon is football. Country football is managed by the Gabon Football Federation (Fédération Gabonaise de Football), founded in 1962. A national league, called Championnat National de Division 1, is organized with thirteen teams in the country.