Ireland is located in the Northern Europe region at latitude 53.41291 and longitude -8.24389 and is part of the European continent.

You can see the location of Ireland on the world map below:

The neighboring countries of Ireland (IE) are:

Ireland borders with the Atlantic Ocean. 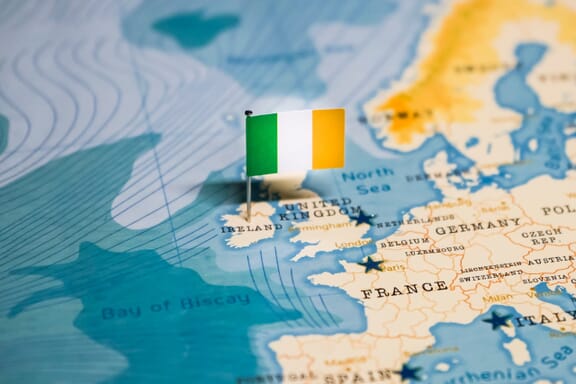 Here are the largest cities in Ireland based on 2021 population data:

Map of Ireland with the Largest Cities

The borders of Ireland, located in northwestern Europe, were drawn with the Atlantic Ocean in the west, the Irish Sea in the east, the St. George Canal in the southeast, and the Celtic Sea in the south.

The Irish Sea separates the country from Great Britain. One of the six on the island belongs to England.

The capital city Dublin is the largest city in the country.

In 2013, Dublin was the happiest city in the world and the best city to live in!

Ireland on the Europe Map

In the inner part of the country, where the surface forms vary, there are large plains surrounded by mountain ranges used as grassland, except for the 1000 square kilometers of the Alien Swamp.

The extensions of the Scottish Mountains descend steeply to the west coast covered with fjords. The Leinster Range, typical Navy, and Wicklow are typical examples of this phenomenon.

There are many islands on the west coast. In the southwest, the height of the Magilly Mountains is 1014 meters, while the other elevations do not reach 452-762 meters.

The Irish lands have passed through two stages of the glacial age: In the first phase all the country, in the second stage, from the Leinster Mountains to the mouth of the Shannon River was glacier-covered.

As a result of severe eruptions, clusters of granite-covered areas, moraines, san, and pebbles emerged as in Connaught Region in the west, Galway in the east.

In Ireland, governed by parliamentary democracy, the president of the state, who is directly elected by the people, has been sitting in his chair for seven years and has come up for two terms.

A cool and warm ocean climate prevails. Winter is soft and damp, summer is cool and cloudy. The average temperature is 15 in summer and 5 in winter.

95% of the population is Catholic, 5% is Protestant.

They use the euro as their currency.

There are two official languages in Ireland: Irish and English. Most of the population prefer English as spoken language.

Natural Resources: The production of lead, zinc, and silver sold out in the past is in decline recently. Coal, copper, barite, gypsum, green and black marble are other natural sources.

Irish Literature: Ireland has given to the world, Ulysses, Dracula and Gulliver’s Travels. Dublin is among the UNESCO Literary Cities where four cities are located. George Bernard Shaw, Samuel Becket, Butler Yeats, and Seamus Heaney have earned Ireland a Nobel Prize in literature.

Music in Ireland: Dance, music, and storytelling are at the core of the Irish. Traditional Irish music has influenced bluegrass, folk, jazz and rock music in North America, Europe, Australia, and other countries. Go wherever you go you feel yourself in Ireland with Irish tunes.

Irish music is incredibly powerful and varied. Enya, Altan Group, Celtic Woman Group, and six Grammy Awards Chieftains, who is one of the best female voices in the world, U2 defined as Rock’s hot ticket, has given Irish music to the world.

Visual Arts and Performing Arts: Riverdance, a traditional Irish dance, has created a storm in the world. Louis Le Brocquy’s highly acclaimed President Portraits and Francis Bacon, born in Ireland, are in the galleries of Dublin Hugh Lane.

Film Industry in Ireland: Irish Jim Sheridan and Neil Jordan, silver screen specialists, are eyeing the Irish film industry with a new generation of Irish filmmakers following the film classics of Once and Garage, and nominations for the Oscar with short animations and awards.