Finland is located in the Northern Europe region at latitude 61.92411 and longitude 25.748151 and is part of the European continent.

You can see the location of Finland on the world map below:

The neighboring countries of Finland (FI) are:

Finland borders with the Baltic Sea. 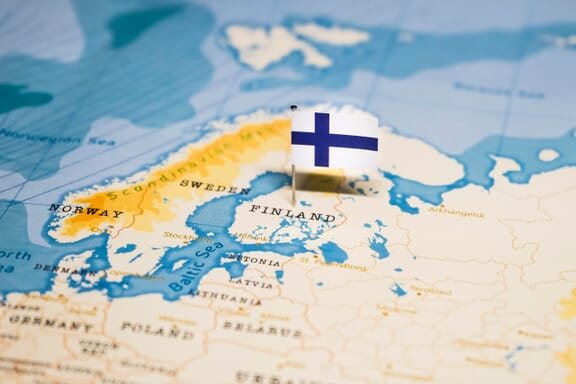 Here are the largest cities in Finland based on 2021 population data:

Map of Finland with the Largest Cities

On 6 December 1917, Finland left Russia and proclaimed its independence. Long before a century ago, Finland maintained its existence as an autonomous state with its own constitution and state style as a Tsarist in the Russian Empire. Furthermore, the Fin constitution has maintained its validity for a very long time.

Moreover, Constitutional Law, which determined the importance and balance of the powers between the government and the President, has not changed after the Second World War and the Cold War.

Finland is divided into 6 provinces, 446 municipalities or local government administratively. Local authorities need to provide welfare services according to the law. Furthermore, the main sources of income are municipal taxes, which are collected at a standard rate of income in connection with an increasingly proportional State income tax.

Below you can find the map of Provinces of Finland.

Its largest city is Helsinki. Southern Finland has a population of 2,116,914 in total. Also, its surface area is 34,378 square kilometers.

Its largest city is Tampere. Western Finland has a population of 1,848,269 in total. Moreover, its surface area is 74,185 square kilometers.

Its largest city is Kuopio. Eastern Finland has a population of 582,781 in total. Also, its surface area is 48,726 square kilometers.

Its largest city is Oulu. The population of Oulu is 458,504. Furthermore, its surface area is 57,000 square kilometers.

Its largest city is Rovaniemi. Lapland’s population is 186,917. Its surface area is 98,946 square kilometers.

Its largest city is Mariehamn. Åland has a population of 26,000 in total. Moreover, its surface area is 6,784 square kilometers.

Finland is a fascinating country with its magnificent forests and lakes that complement a lush landscape. Finland is a country in Central Asia and Siberia.

Later, it became one of the Nordic countries, which became the economic and political union formed by the countries of Northern Europe. A large part of the country consists of lowlands and mountainous regions are rare.

Official languages are Finnish and Swedish. The majority of the population speaks Finnish.

Its neighbors are Russia to the east, Norway to the northwest, Sweden to the west.

Plenty of lakes (about 60,000) occupy almost a tenth of the country. The total area of the lakes is approximately 33,522 square kilometers. Especially in the south, connected to each other, a system of lakes suitable for ship transportation has come to fruition.

Salman and Paijanne are the largest lakes in the country. The rivers are not smooth flowing. The biggest waterfall is Imatra.

The government consists of the Prime Minister and 19 other ministers. The Ministers have comprehensive and independent authority to administer their Ministries and their subsidiaries.

There are 6 provinces, 446 municipalities or local government administratively. Local authorities need to provide welfare services according to the law. The main sources of income are municipal taxes.

In local governments, the highest decision-making authority is the Municipal Council elected by direct representation. This Assembly appoints legal and voluntary committees to perform administrative duties. Representations of women in these organizations are guaranteed by law. Tens of thousands of citizens in the country are involved in local government work.

The share of the southwest winds is great. The snow lasts for five months in the south, and seven months in Lapland in the north. The summer is the rainy season, the weather is airy. Average annual precipitation decreases in the north.

91.6% of the population is dependent on the Protestant sect of Christianity, and on different denominations. The majority of the remaining religious minorities are at the Greek Orthodox square. There is a small amount of Jews.

After World War II, Finland, the vast majority of its population has become a semi-industrialized country dealing with agriculture and forestry.

Agriculture: Only 9% of the total surface area is arable. The efficiency is high due to the machinery in agriculture. Wheat, barley, oats, potatoes, and rye are the main agricultural products.

Livestock: Cattle, pigs, poultry, as well as traditionally grown for meat and milk. About one-fourth of the annual fish production is provided by lakes and rivers. The second job of many farmers in Finland is fur farming. The number of country mink and fox farms is 6,000. Following this development, the European fur stock market moved from Copenhagen to Helsinki.

Natural Resources: One of the great wealth resources of the country is the forests covering 67% of the surface area. Mining production; 2,400 tons of lead per year, 105,000 tons of nickel, 55,000 tons of zinc, 650 thousand tons of iron filigree. 65% of energy needs are met through foreign purchase. The share of hydroelectricity is 27% in the production of electricity, which is 51 billion kilowatt-hours per year, and 45% of the nuclear energy.

Finland is a sauna country. The countrywide saunas and the magnificent structure of Helsinki attract many tourists to the country.

The best way to get information about an individual’s culture is to live in that country and be a part of it. From this point of view, Finland offers you some of the finest examples of the world, especially in the field of art and design, and the country’s culture gives you a closer understanding. Today Finland is a country that fascinates the countries of literature, visual arts, architecture, music, cinema and technology, and allows you to step into a colorful world with countless events and festivals.

Fin’s are especially eye-catching with their creative designs in fashion, furniture, ceramics, and architecture. Fin architect and designer Alvar Aalto, who stamped on 1950’s years, is the most important name of the country.

The most important works of the architect who has many prizes include Viipuri Library, Paimio Sanatorium, Villa Mairea. Finland, known for its underground rock church Temppeliaukio, designed by the architects Suomalainen brothers and who has received great interest since 1969, is also home to many architectural pieces.

Where is Finland located at?

What country is Finland?

Finland is a Republic.

Is Finland an expensive country?

Yes, Finland, like all Nordic countries, is an expensive country.

Do they speak English in Finland?

Finland is known for its saunas, lakes, and ice-hockey team.