Iceland is located in the Northern Europe region at latitude 64.963051 and longitude -19.020835 and is part of the European continent.

You can see the location of Iceland on the world map below: 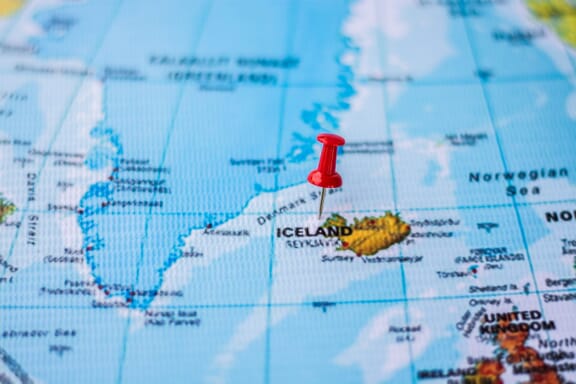 Here are the largest cities in Iceland based on 2021 population data:

Map of Iceland with the Largest Cities

Iceland is located in the north of the Atlantic Ocean, south of Greenland and between Norway and the British Isles. The island of Iceland is a volcanic island. There are also many small islands around.

93.02 percent of the people of Iceland are from the Norwegian and Celtic descendants and 6.98 percent from foreigners. Located in the northernmost part of the Northern Hemisphere, Iceland is a country that attracts attention with its natural beauties and different landforms.

Although the name means ice country, the country has a mild climate with the effect of the hot stream of Gulf Stream. It can be 24 hours a day and night during different seasons of the year.

The total surface area of the country is 103,000 km². A large part of Iceland is volcanic and the volcanoes on the island are still active. The number of them is 200. The most important is Hekla, which is 1490 meters high.

The coasts of Iceland are flat in the south and indented in other places. The length of the coast is more than 6,000 km.

Some parts of the island emerged as a result of the eruption of volcanoes in the past. It is covered with lava plains. In these plains, there are ice domes called jökül. The largest of them, Vatnapöhull is Europe’s largest glacier with an area of 8,500 km².

On the island, there are many rivers with plenty of waterfalls. They are short and unsuitable for transportation. The most important river is Tjorsa (210 km). There are many crater lakes in Iceland. Thingvallavat Lake, which is the most important, is 120 km² and is 116 meters deep.

On 17 June 1944, the Republic of Iceland left Denmark and declared its independence. The constitution was held on 16 June 1944. The president is Ólafur Ragnar Grímsson, who is elected every four years. It has two 40-member and 20-member councils, and the mandate of both is four years. Members are determined by election.

The Prime Minister is authorized by the President and establishes the government. The country is managed by 23 regions and 14 cities.

There are two seasons in Iceland, summer, and winter. Despite its geographical coordinates, the country has the warmest and hottest hours in June, July, and August.

The sun in the northern part of June does not set for 18 days. The average rainfall is 865 millimeters in the capital and 1710 in the southeast.

At a rate of 95.6 percent, the majority of the population is dependent on the Evangelist sect of Christianity. The remainder is 3.7% Protestant and 0.7% Catholic. Ten percent of the population of Iceland say that they are atheists and 31 percent say they are not religious despite being faithful.

Being an island country, the basis of the Icelandic economy is fish and seafood. The main species of fish are whale and vertex. In addition, animal husbandry is an important source of livelihood. Animal products also play an important role in exports.

Only 0.5 percent of the territory of the country is suitable for agricultural production. Its main products are animal feed, potatoes, and turnips.