Norway is located in the Northern Europe region at latitude 60.472024 and longitude 8.468946 and is part of the European continent.

You can see the location of Norway on the world map below:

The neighboring countries of Norway (NO) are:

Norway borders with North Sea, the Norwegian Sea, and the Arctic Ocean. 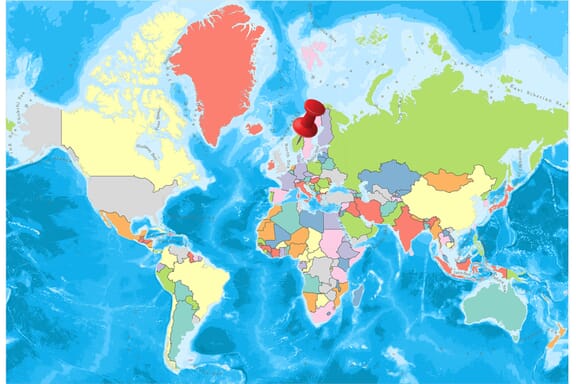 Here are the largest cities in Norway based on 2021 population data:

Map of Norway with the Largest Cities

Norway; It is a country that is in excellent condition in terms of living standards besides the magnificent landscape of mountains, nature, and fjords. It is also the country where most books are bought per person in the world.

The capital is Oslo. It is one of the most expensive cities in the world. The official language is Norwegian, Bokmal and Nynorsk. The currency is Norwegian krone.

It is an independent kingdom in the northernmost part of Western Europe, containing the north and west of the Scandinavian Peninsula.

Norway is the European country where the average height has reached its top level, mountains covered with ice masses dominate the surface shapes. The country where the effects of glaciers are seen all around is well-known for its fjords with steep edges on the west coast.

Sognefjorden, which stretches for 160 kilometers, is the longest inland region of the country. The high mountain plateau is a surface pattern specific to large areas in the south and far north. In the southeast, the main plains stretch from Oslofjord to the north. Gromma, Dramselve, Lögen, Tana are the main rivers; the largest of over 150 small lakes is Lake Mjösa, 85 kilometers north of the capital Oslo.

Norway is governed by a constitutional monarchy on the basis of a parliamentary, democratic and representative structure. However, the political power of the King is rather limited and more symbolic. King V. Harald, who is still the head of the country, came to the throne on 1 January 1991.

Despite its location in the north, due to the Gulf Stream effect, the climate is relatively modest. However, the magnitude of the length of the country leads to variability in temperature and precipitation. Although the time covered with snow in the southwest is 30 days, this time is 180 days at the northern end where the temperature falls below 14 degrees in winter.

In winter, the average temperature in the southwest is 3–16 degrees. There are also differences between the sea where the continental climate is dominant and the sea near the west.

The warm North Atlantic Current and the warm west air currents soften the climate of the coast. Another difference between the high regions and the shores is that, depending on the height. Precipitation is most common in winter, especially on the coast (annual rainfall reaches 2,000 millimeters).

90% are Christians. The rest of the population consists of people who believe in other religions. The majority of Norwegians who adopt Evangelist Lutheranism (90%) in a strict manner, the vast majority belong to the state church.

The State Church has allowed women to become priests after 1938. However, nowadays, it is easy to withdraw from the membership of the church.

Agriculture: 2.2% of the cultivated land, 3% of the arable land. The main agricultural areas are the southeast plains in Oslo, flat areas around Trondheim, and Jearen Plain near Stanvangen. The foundations of agriculture are largely mechanized farms that are heavily operated. Forestry, fishing, mink hunting, farmers are additional efforts. The main products grown are barley, potato, oat, wheat.

Livestock: Most of the pastures are protected for the feeding of animals. The most fed animals are sheep, cattle, pigs. In the annual fish production, it is in the top ten in the world.

The oil and natural gas deposits in the North Sea are processed in three main areas: Ekofisk, Starfjord, and Frigg. A portion of the oil is processed in the United Kingdom’s refineries.

Some of the forests that cover 20% of the country depend on agriculture. Of forests with economic value, 80% are made up of softwoods (especially pine and spruce).

Tourism: Tourism supplies 1 billion dollars of foreign exchange to the country’s economy every year. The main tourist center is Oslo. However, Norway attracts many tourists; the fjords, the mountainous regions with wild beauty, and the people who live in the serenity of the ice-covered regions. There are many skiing and winter sports centers in the country.

The Nordic Art Center offers artists the opportunity to focus on their designs and work. Inviting artists to inspirational living and working conditions, the Nordic Arts Center strives to contribute to innovative and creative artwork.

Winter sports are popular throughout the country. Norway is among the most medal-winning countries in the Olympic Winter Sports.