Greece is located in the Southern Europe region at latitude 39.074208 and longitude 21.824312 and is part of the European continent.

You can see the location of Greece on the world map below:

The neighboring countries of Greece (GR) are:

Greece borders with the Aegean Sea, the Ionian Sea, and the Mediterranean Sea. 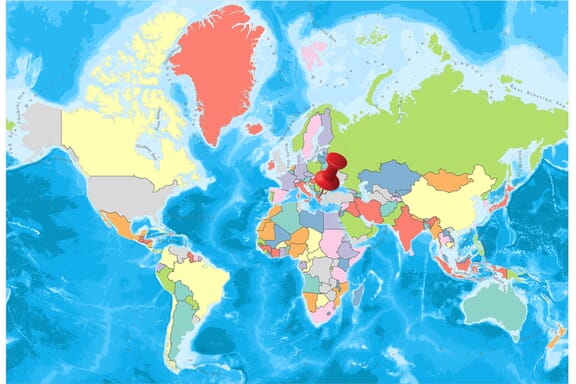 Here are the largest cities in Greece based on 2021 population data:

Map of Greece with the Largest Cities

Greece is very convenient for sea holiday with its islands and beaches, as it is hosted by many civilizations in the past, it can also be preferred for cultural tourism. 17 different places in the country are located in the UNESCO World Heritage List. Athens, which has a long history, is the capital of the country.

It lies south of the Balkans. North of Albania, Macedonia, and Bulgaria it is neighbor to Turkey in the east. There is the Aegean Sea in the south-east, the Mediterranean in the south, and the Adriatic Sea in the west.

In the mountainous continental land, the distance from any sea does not exceed 90 kilometers. Greece, a maritime country covered with mountains, includes one of Europe’s longest coastal lanes, with hundreds of coves and gulfs opening to three different seas from three directions.

Among the mountain ranges are the Dinar Alps and the Pindus Mountains, as well as the Olimpos and Parnassos mountains in Greek mythology, are the highest points. The islands in the Aegean Sea constitute 1/5 of the total surface area. The most famous of these are the Twelve Islands, Sporades, Cyclades, and Ion Islands.

Greece is a parliamentary republic based on the presidential system. The head of state and the head of government are separate. The lawmaking authority belongs to the elected council every four years. Judicial power belongs to independent courts. Greece is divided into 10 regions and 51 administratively.

Mediterranean climate is dominant. The summers are hot, the winters warm and calm. As the country goes to the north, the winter months become cold and the summer months warmer. The precipitation rate of western coasts is higher than that of the country.

Faithful Greeks are Orthodox Christians in large proportions. In terms of religious belief, 98% of the population believes in the Christian Orthodox sect, with 1.3% Muslim minority in the country.

Greece is in a position to meet imports with some 80% of the total demand with very limited and few production facilities, especially in industrial products.

Shipbuilding is a vital sector for Greece. The sector employs more than 200,000 people, with 7.5% of the country’s gross domestic product.

The Greek trade fleet holds about 20% of the world fleet. According to data issued by the Greek Maritime Association, the annual income of the country from ship-to-ship is over $14 billion.

The expansion of Piraeus and Thessaloniki ports is being emphasized due to the development of imports and transit trade made with new EU member countries.

The tourism sector, which has a reserve for the Greek economy, accounts for about 16% of the country’s output. 657 thousand people are employed in the sector.

Greece is among the top 20 countries attracting the most tourists in the world. There has been a remarkable increase in the number of foreign tourists coming to Greece recently. The growth of tourism is expected to be the driving force.

Greek art began with the Mycenaean Civilization and evolved over thousands of years with Classical Greek, Roman Empire and then Byzantine. Persians, Phoenicians, Ottomans, Venetians, Genoese and British people also left important traces on modern Greek culture, so it is useful to have an idea about these civilizations when they learn about Greece.

In many countries of the world, Greece is regarded as the crown of Western culture and democracy. In the source of modern democracies, there are concepts of participation in the governance of the people of old Greece, judging by jury, equality against laws.

Ancient Greek civilization has pioneered many fields of science and art based on systematic ideas such as biology, geometry, history, philosophy, and physics. The country created important literary genres such as epic poetry, lyric poetry, tragedy, comedy.

The country competed in the Olympic Games every four summers, one of only four countries doing it. With a total of 110 medals, Greece ranks 32nd with the gold medal for the Summer Olympic Medal all the time. The best performances are the 1896 Summer Olympics, where Greece finished second in medals with 10 gold medals.