Portugal is located in the Southern Europe region at latitude 39.399872 and longitude -8.224454 and is part of the European continent.

You can see the location of Portugal on the world map below:

The neighboring countries of Portugal (PT) are: 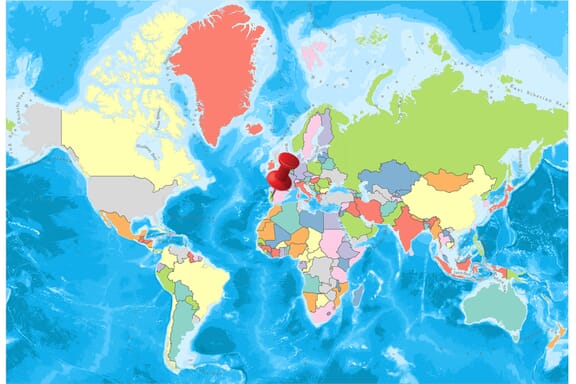 Here are the largest cities in Portugal based on 2021 population data:

Map of Portugal with the Largest Cities

Located in the southern part of Europe, Portugal is in the Iberian Peninsula. It is located around the Atlantic Ocean and Spain.

The Azores is the archipelago located in the Atlantic Ocean between Europe and America. It consists of 9 islands with a total area of 2,355 square kilometers. These islands are in 3 groups:

There are 18 administrative regions in the country. The Azores and Madeira have autonomous status in the Atlantic Ocean. In Portugal, which has a single-parliamentary parliament with 230 seats, general elections are held on a principle of proportional representation every four years. In the last general elections on (4 October 2015), a minority government was established with the support of the other leftist parties (Left Block, Communist Party) represented by the Socialist Party in Parliament.

The president can be chosen twice by the people for five years. Marcelo Rebelo de Sousa, who won the last Presidential elections held on January 24, 2016, took over this task on 9 March 2016.

Agriculture: Generally, productivity in agriculture and livestock production is low and marketing opportunities are not developed. The farms in the north are small and divided between the families.

Livestock: The total number of animals (cattle, sheep, goats, horses, donkeys) is 10.5 million. Fishing, which constitutes the most important sector of animal husbandry, is a great source of foreign exchange. Sardines and cod are the most hunted species.

Tourism: Portugal is one of the most tourist receiving countries in Europe. The Algarve in the south and the capital Lisbon, Madeira, and the Azores Islands are the most popular destinations for tourism.

Calouste Gulbenkian Foundation operates the museum, which was the legacy of businessman Calouste Gulbenkian and opened its doors in October 1969. This country, which provides you with colorful days thanks to its entertainment life, culture-art venues, historical texture, and unique beaches, has a very active appearance, especially in spring and summer months.

Football is the most popular sport in Portugal. As of October 2011, the Portuguese national soccer team is in the 8th place in the FIFA World Ranking among FIFA member national teams of 208 countries.

The legendary Eusébio is still the unforgettable symbol of Portuguese football. Luis Figo was selected by FIFA as the player of the year 2001. Rui Costa and Cristiano Ronaldo are considered to be important players.