Kenya is located in the Southern Africa region at latitude -0.023559 and longitude 37.906193 and is part of the African continent.

You can see the location of Kenya on the world map below:

The neighboring countries of Kenya (KE) are:

Kenya borders with the Indian Ocean. 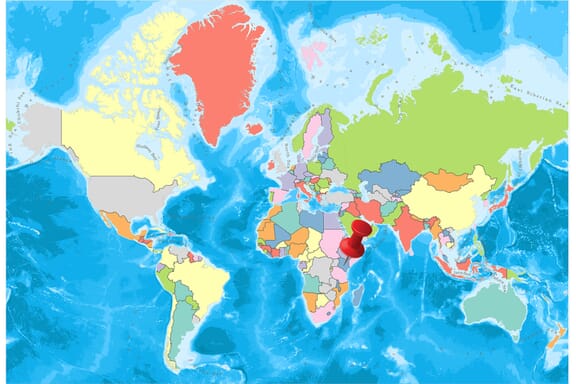 Here are the largest cities in Kenya based on 2021 population data:

Map of Kenya with the Largest Cities

The eastern and western parts of the country are very different from each other. There are narrow coasts to the Indian Ocean in the Southeast.

The inner region extending from the shoreline to the northern border consists of arid plains covering more than half of the country.

The Republican regime was adopted in 1964 in the country which adhered to the British Nation Society and proclaimed its independence in 1963.

A tropical climate prevails throughout the country. The average temperature in the coastal zone is 27 degrees, while in mountainous regions it is 16 degrees. The region with the highest rainfall is the western part.

The industry has not developed in the country. The industry is limited to the processing of agricultural raw materials and the production of light consumer goods. In addition, petroleum refining, motor vehicle assembly, cement, and textile industry branches have developed recently.

Moreover, the industrial center is around the capital city Nairobi and Mombasa. The economy of the country is based on agriculture and animal husbandry.

Furthermore, tourism is an important source of income. There are plenty of reasons to visit Kenya.

Livestock has improved. Most cattle, sheep, and goats are fed. From these animals, enough meat is available to be exported during non-arid seasons.

Thanks to safari tours and national park visits, many tourists visit the country every year.