You can see the location of Lesotho on the world map below:

The neighboring countries of Lesotho (LS) are:

Lesotho is a landlocked country, which means it does not have direct access to the open ocean. 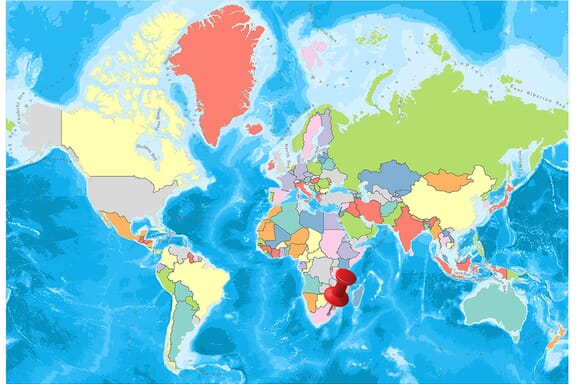 Here are the largest cities in Lesotho based on 2021 population data:

Map of Lesotho with the Largest Cities

Maseru is the capital of the country, which was called Basutoland until 1966 when the independence from the United Kingdom was gained and governed by parliamentary monarchy.

The western regions of the country are made up of high-valley highlands and sandstones containing the main settlements of the country. The altitude in these regions is measured between 1,400 m and 1,700 m and river beds and small mountains are among the characteristics of the land.

The lowest point of the country is 1.400 m and it joins the Oranje and Makhaleng rivers. With these elevations, Lesotho is the only country in the world where the average rise of the whole country is 1,000 m and above between the independent states of the world and 80% of the country’s territory is 1,800 m.

The output sources of the Oranje and Kaledon rivers, one of the most important water sources of the southern part of the African continent, are located in Lesotho. Like many rivers in the country, these canyons form deep canyons.

Maletsunyane waterfall, which is located near the Semonkong settlement and the second longest in the southern part of Africa due to its uninterrupted flow, flows down from a height of 192 m. The formation of soft sandstone from the plateaus to the high mountainous areas may cause erosions frequently due to the increasing population density. Only 11% of the territory of the country is suitable for agricultural activities.

The country’s largest natural resources are water reservoirs, with a small number of diamonds and other minerals. Due to the abundance of water reserves in the country, many dams have been started and Katse Dam has the biggest dam title in these areas.

According to the constitution adopted on 2 April 1993, the form of government of the country was expressed as a two-chamber parliamentary monarchy. In the constitution, an independent judiciary system is guaranteed, with emphasis on separation of powers. The law is also guaranteed in matters such as human rights, freedom of religion and conscience, and privacy.

Since the country is located in the southern hemisphere section, the seasons are experienced as the opposite of the northern hemisphere countries. There is a mild climate throughout the country. The winter months are mostly cold in the months of June and August, and snowfall can be experienced in high areas in the eastern part of the country. Even in the winter, the sun often shows itself during the day, and during the year the sun can be observed for approximately 300 days.

The temperature is high in November-March when the summer is experienced. There are 100 days of torrential rainfall in most of the country in summer.

Due to the high altitude in the country, very high-temperature differences may occur during the day. In addition to the night temperature, which can be measured as -15 ° C in winter, more than 30 ° C in summer can be measured.

The average temperature measured throughout the year in Maseru is 15 ° C. Very high points such as the mountain of Drakensberg are experiencing snow all year round.

90% of the population of Lesotho has a very large proportion of the Christian faith.

The remaining 10% in the country believes in African nature religions and few believe in Islam and Hinduism.

Lesotho, based on national income per capita, is one of the poorest countries in the world with 43% of its population earning less than one dollar per day according to 2003 data. 60% of the population operates in the agricultural area where two-thirds of the country’s total income is obtained.

The most common crop cultivated throughout the country is corn, and many people make agriculture for their own consumption. In the country where there is an important place in animal husbandry, a part of the population is working as a seasonal worker.

Especially after 2011, with the production of diamonds obtained from high altitudes, positive developments took place in the economy and a 5.2% growth rate was achieved.

The country, which is rich in water, transforms these resources into electricity with the dam formations named as Lesotho Highland Water Project and thus meets the country’s huge electricity needs.

A large part of the electricity and water obtained here is sold to the neighboring country of South Africa.

The football, the most popular sport in the country, is managed by the Lesotho Football Association, founded in 1932. The national league is not at the desired level in Lesotho, as good footballers across the country have gone to the Republic of South Africa to play under better conditions.

Lesotho national league is held with the participation of sixteen teams. Lesotho national football team, named as Likuena by fans, ranked 152nd in the FIFA ranking announced in February 2016 and the highest ranking in 2003 was 120th.

Other than football in Lesotho, judo, taekwondo, boxing, long-distance running are other types of sports.