You can see the location of Kazakhstan on the world map below:

The neighboring countries of Kazakhstan (KZ) are:

Kazakhstan is a landlocked country, which means it does not have direct access to the open ocean.

Kazakhstan borders with the Caspian Sea. 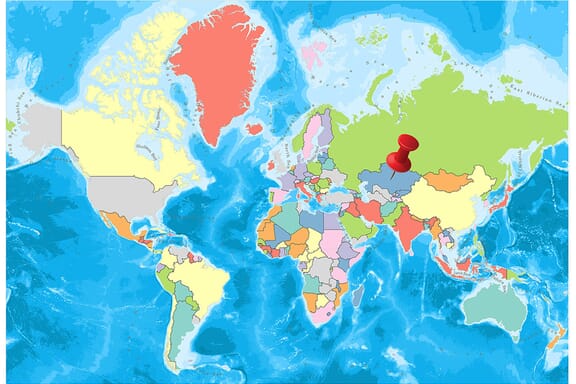 Here are the largest cities in Kazakhstan based on 2021 population data:

Map of Kazakhstan with the Largest Cities

Other Countries in the Central & South Asia Region

Kazakhstan, one of Central Asia’s independent Turkish states, is the ninth-largest country in the world.

The country has a coast to the Aral and the Caspian Lakes.

One-fifth of the country’s territory is covered with mountains. The other part consists of hilly plains and plateaus. There are thousands of small streams in Kazakhstan. The large part of these streams is poured into the Caspian Sea, Aral, Balkaş and Tengiz lakes. The rivers passing through the territory of Kazakhstan and pouring into the Northern Ice Sea are Irtiş, Isim, and Tobul. Most of the streams dry in summer. The main rivers are Ural and Seyhun. Many dams are located on the Seyhun River to prevent floods and irrigation.

Kazakhstan declared its independence on 16 December 1991. The Constitution was adopted on 28 January 1993. In the constitution, the country is defined as a unitary, secular, democratic and social state governed by a presidential system.

Kazakhstan has a continental climate due to its non-coastal and continental position. Summers are hot and dry, winters are cold and snowy. In January, temperatures range from -19 to -4 degrees. It varies between 19 and 26 degrees in July.

Muslims account for 70 percent of the Kazakh population. In the country where there is no official definition of religion, 26 percent of Christians live. The rest of the population is Buddhist, Jewish and non-religious.

Kazakhstan is rich in oil, uranium, iron and gold reserves. 26 percent of the world’s chromium, 20 percent of gold and 17 percent of uranium is located in Kazakhstan reserves.

Handicrafts are very well developed in Kazakhstan. Felt, wood, leather, silver and gold handicraft products come in the country’s touristic places. The most popular of these are the toy camels made of felt, and the traditional tents called yurta. The models of the local musical instrument called Dombra, and the sweater dolls dressed in traditional costumes are among the finest examples of this enormous craftsmanship.

The equestrian sport competitions in Kazakhstan are traditional horsemen games that come to mind first. For centuries, among the Central Asian nomads, and of course the races and games that are widely held among the Kazakhs can be seen as root, bayge, girl kuvuv and avdarspak.