Ukraine is located in the Eastern Europe region at latitude 48.379433 and longitude 31.16558 and is part of the European continent.

You can see the location of Ukraine on the world map below:

The neighboring countries of Ukraine (UA) are:

Ukraine borders with the Black Sea, and the Sea of Azov. 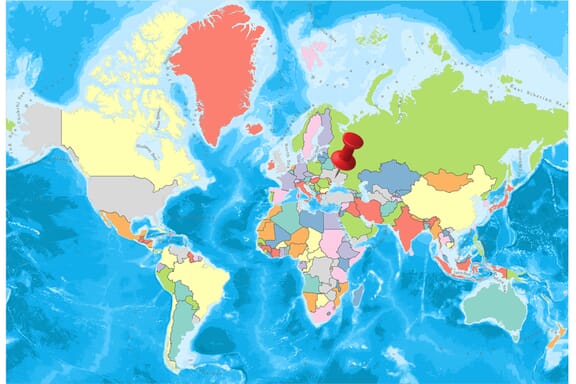 Here are the largest cities in Ukraine based on 2021 population data:

Map of Ukraine with the Largest Cities

Ukraine is situated in the southeastern part of Europe and is the largest country in Europe with an area of 603,628 square kilometers.

The geographical structure of Ukraine is composed of large plains and covers a large part of the Eastern Europe Bloc. In the middle of Ukraine lies the Dnieper Plain of the Dnieper River from north to south.

Other plains are located in the south of Ukraine along the coasts of the Black Sea and the Azov Sea. In the Crimean Peninsula in the southernmost region, it is possible to encounter both plains and mountains. To the west of the country, the Carpathian Mountains cover a wide area of 240 km.

The highest legislative body in Ukraine is the High Council. Parliament members are elected every five years. The High Council appoints the President and members of the Council of Ministers.

Ukraine is located in the temperate climate zone and about 400-600 millimeters of precipitation per year. Except for the southern region, there are not very hard colds; the winters are warm.

The summers are warm and rugged, rarely rainfall. The country is suitable for agriculture because the temperatures are generally mild. Ukraine is also one of the most important sugar producers in the world. Sugar produced in the country is of great importance for import and export.

The main livelihoods of Ukraine are based on industry and agriculture. With the Ukrainian natural resources, it is also called “grain warehouse” of Europe.

The main sources of income are agriculture, mining based industry, fisheries, and coastal tourism. Coal, iron, manganese, gypsum are underground resources. The northern part of Crimea is the most prevalent part of agriculture.

Sunflower, corn, and wheat are mainly grown. The required water is supplied through channels from the Dnieper river. The headquarters of the administrative unit, Simferopol is also the center of culture and industry of the peninsula.

Tourism: Odessa is a city that attracts attention with its natural beauties, and ranks fourth among the big cities in the country.

There are many reasons why tourists visit Ukraine. Odessa is one of them, it is a popular place to visit with its attractions, tours, and activities.

Kiev is the largest city in Ukraine, with a population of around 3 million.

Lviv is also the art city. Art galleries, churches, museums, cathedrals, operas, temples, and theaters are located in this city. Lviv, which is the most important city of the country in artistic and cultural terms, is on the list of Unesco World Cultural Heritage.

It is a country where every kind of sport is popular. Its geographical structure is suitable for winter sports as well as for summer sports. But football, like everywhere else, is exciting here too. The Olympics, however, are watched with great interest.

Ukraine on the Europe Map

Map of Ukraine with Regions