Colors and the Meaning of the Ukraine Flag

The Ukrainian flag colors are blue and yellow. The flag displays these colors in two equally sized horizontal bars, with blue on top and yellow below. In modern times, the blue is said to represent peace and the color of the sky, while the yellow represents prosperity in the form of the golden wheat fields that are an important element of Ukrainian history.

There have been some changes to Ukraine’s flag and its associated colors in the past, and there are some other flags that are still associated with Ukraine today. In this post, we’ll take a look at how the Ukraine flag has changed over the years as well as some other flags and symbols that are used in the country.

Why did Ukraine change their flag?

Ukraine has had to change its flag multiple times due to changes in political rule. While Ukraine was part of the Soviet Union, the Ukrainian flag was banned and a Soviet flag was required. Ukraine then reclaimed its national flag after it gained independence following the dissolution of the Soviet Union in 1991.

How old is the Ukrainian flag? 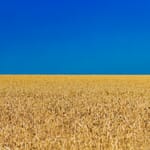 The current design of the Ukrainian flag is 96 years old, but this was not Ukraine’s first national flag. The first national flag of Ukraine was adopted in 1848 by revolutionists fighting for independence from Austro-Hungarian rule. This flag was the same as the current flag, except that the colors were reversed.

In 1918, the design of the Ukrainian flag as it is currently known was decided upon, although with slightly different shades of blue and yellow. The colors were reversed to symbolize blue skies over golden fields of wheat.

The colors appeared in reversed order in various previous versions of the flag, with yellow appearing on top, but the current color scheme was decided upon in 1992. The shades of blue and yellow were also lighter in previous versions.

What is the red and black Ukrainian flag?

The bicolor red and black flag belongs to the Ukrainian Insurgent Army. This was a nationalist paramilitary group formed during World War II. The group’s actions during the war involved guerilla military actvities against the Soviet Union, the Polish Underground State, Communist Poland, and Nazi Germany.
In more recent times, the red and black flag has been associated with Ukrainian nationalism. The red on top of black colors are said to represent the blood of Ukrainians blackening the earth below.

What is the symbol on the Ukrainian flag? 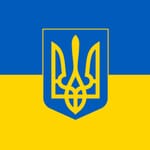 The symbol seen on the Ukrainian coat of arms is the Ukrainian trident, called the tryzub in Ukrainian. The symbol comes from Volodymyr the Great, the first Grand Prince of Kyiv. He was among the first of the Kievan Rus to convert to Christianity in 988.

The trident was first thought of as a national symbol when Ukrainian historian Mykhailo Hrushevskyi suggested adopting it in 1917. During Soviet control from 1919 until 1991, the symbols used in the country were those related to the Soviet Union. After the dissolution of the Soviet Union, Ukraine officially adopted the emblem as the small coat of arms in February 1992.

History of the Ukraine Flag

The history of flags used in Ukraine is long, and many changes have taken place in the last millennium. Even today, there are multiple flags associated with the country. By tracing the history of the Ukrainian flag, it’s possible to arrive at a better understanding of the country’s history.

The use of the yellow and blue colors dates back thousands of years to the pre-Christian era, when the colors represented fire and water. The colors were almost certainly used in the Battle of Grunwald that took place in 1410 by militias in the Polish-Lithuanian Commonwealth.

There are some, however, that claim the general design of the current Ukrainian flag was first devised in 1848 during the Spring of Nations, or the revolutions of 1848 in the Austrian Empire.

The Ukrainian flag was banned while the country was part of the Soviet Union. Various varieties of a flag based on the red October Revolution flag were used during this time.

While Ukraine was a part of the Soviet Union, the flag of the nation changed completely. In fact, anyone displaying the blue and yellow flag used in early Ukrainian independence could be subject to criminal prosecution for “anti-Soviet propaganda.”

The flag that was used during Soviet rule adopted the red from the flag of the October Revolution. A variety of flags were used in Soviet Ukraine between 1922 and 1991, though they all featured a mostly red background. The letters of the U.S.S.R. or U.R.S.R. and the gold hammer and sickle were also used.

After declaring independence in August 1991, Ukraine flew a blue and yellow flag that had slightly different shades of blue and yellow from the current version. In 1922, the official colors and design for the Ukrainian flag were agreed upon.

As seen on the political map of Ukraine, the country is bordered by six others. It shares the highest amount of its border with Russia, which is to the east and northeast of Ukraine. Its northern border is shared with Belarus, and Poland, Slovakia, Hungary, Romania, and Moldova all lie to the country’s west and southwest.

There are also two major bodies of water that border Ukraine: the Black Sea and the Azov Sea.

Ukraine is a European country that normally welcomes millions of tourists every year with its nature, mountains, architecture, history, beaches, and nightlife. Due to the 2022 Russian invasion of the country, tourism has effectively disappeared, but there are plenty of reasons to visit Ukraine when the country isn’t involved in war.

The capital city of Ukraine is Kyiv, which is also the largest city in the country. There are a total of 26 oblasts (regions) in Ukraine. Of these, the Odessa Oblast is the largest by size, and the Donetsk Oblast is largest in terms of population.

Popularity of the Ukraine Flag

The Ukrainian flag is one of the most recognizable flags today, and that has a great deal to do with the ongoing Russian invasion of Ukraine. People all around the world have been purchasing and displaying the flag of Ukraine in shows of solidarity with the country.

The current events in Ukraine have made the flag one of the most famous in the world. What was once a flag that was probably not known by many outside of Ukraine can now be seen in nearly every country in the world. There have even been shortages of the flag in many flag retailers because of the increased demand.