Czechia is located in the Eastern Europe region at latitude 49.817492 and longitude 15.472962 and is part of the European continent.

You can see the location of Czechia on the world map below:

The neighboring countries of Czechia (CZ) are:

Czech Republic is a landlocked country, which means it does not have direct access to the open ocean. 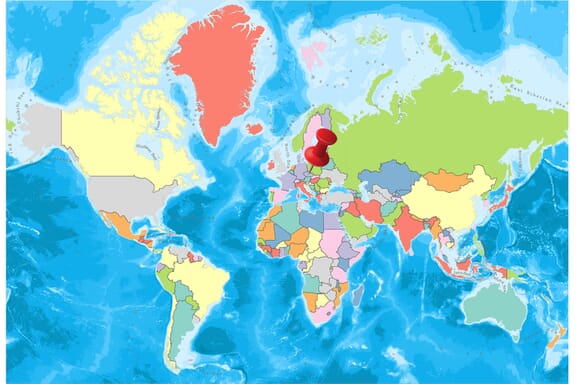 Here are the largest cities in Czechia based on 2021 population data:

Map of Czechia with the Largest Cities

The Czech Republic is a Central European country without coasts. The country was a result of the disintegration of the Austrian Hungarian Empire. Poland in the North, Germany in the West and Northwest, and Slovakia in the south in Austria, constitute the neighboring countries of the Czech Republic.

The Czech Republic, a rugged country, is almost equidistant from the Mediterranean, the North Sea, and the Baltic Sea. Bohemia, where Elbe River has been abolished, is located in the western part of the country. It consists of Paleozoic rocks and  Krkonosse, Südetler and Jsenekyl surround it from the north. The highest peak in this area is Snezka.

The capital Prague is on the banks of the Vivata River, which is intermingled with the Elbe River in the middle of the region. Moravia and South Silesia form a sequence of ever-expanding basins from north to south. The Moravian plains divide Bohemia from the Carpathians of Slovakia and form a passage called the Moravian Gate. The Moravian Gate separates Morava and Oder basins.

There is little religious life in the Czech Republic. The Czech Republic is home to the largest population of atheists in the European Union after Estonia. There is no religious belief in 70 percent of the population. It is astounding that the atheist population is so high that the density of churches, cathedrals, and monasteries in the country is high.

People don’t use cathedrals, churches and monasteries today so they serve as a concert hall, museum. The oldest church in Central Europe is in Prague. The rate of atheists in the country is so high that some depend on communism and some depend on the lack of religious education in schools.

The Czech Republic is an industrial economy. Among the European countries, the most uranium is produced by Czechoslovakia, as well as coal, antimony, mercury, and petroleum in small quantities. The agricultural products of the Czech Republic are typical of terrestrial climatic products, wheat, barley, oats, rye, corn, and flax seed. Also, Czech beer is very famous all over the world.

Prague is home to many important historical monuments. This city, which passes through the Vltava River, offers a variety of excursions to travelers with its bridges, canals, mystic air, architectural monuments, and medieval monuments. There are many important places in the city, especially the Old Town, which is on the UNESCO History Heritage List.

Hundreds of years of first-class theater, art, and music experience have created a knowledgeable and cultured society. Prague’s residents love and appreciate theaters and theatricals as much as tourists, enjoying the works of Habsburg period and artifacts clearly selected for nationalism that developed during the nineteenth century.