Hungary is located in the Eastern Europe region at latitude 47.162494 and longitude 19.503304 and is part of the European continent.

You can see the location of Hungary on the world map below:

The neighboring countries of Hungary (HU) are:

Hungary is a landlocked country, which means it does not have direct access to the open ocean. 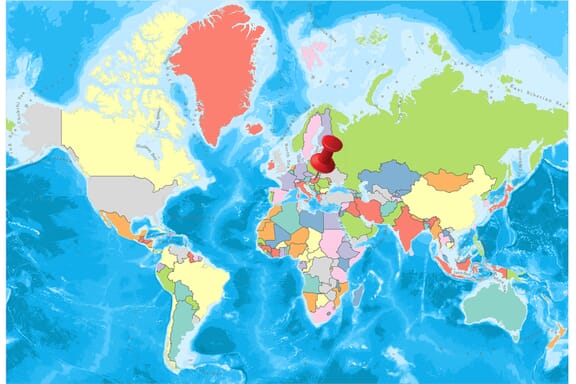 Here are the largest cities in Hungary based on 2021 population data:

Map of Hungary with the Largest Cities

Hungary is one of the oldest settlements in Central Europe. The country without seashore is located in the south of Slovakia, east of Austria.

Hungary, located on the outskirts of the Carpathian Mountains, is among the countries to which the Danube River passes.

The country that hosts the Celts, the Romans, the Slavs, and the Avars, has been maintaining its independence since the 9th century. With the richest popular culture in Europe, Hungary is visited by over 10 million tourists every year with its historical monuments, natural parks, and thermal baths.

Danube River and Tisza River pass through Hungary, one of the most beautiful countries of Central Europe. Danube River separates country into two parts; the Buddha (Hill) and the Pest (Plain). Heviz Lake, the world’s second largest thermal lake, Lake Balaton, the largest lake in Central Europe, and Hortobagy, the largest grassland in Europe, are located in the territory of Hungary.

With 145 protected areas, 35 special parks, and 10 national parks, the country is an important stop for birds during the spring and autumn migration season. Aggtelek National Park, located near Kosice and situated on the UNESCO World Heritage List, is made up of 712 caves. This park, which Hungary shares with Slovakia, occupies 55,800 hectares and is the world’s largest cave system.

With more than 1000 spas and 300,000-capacity SPA facilities, the country serves 450 baths. The capital of Hungary has the largest underground geothermal cave system in the world in Budapest. The Szechenyi Thermal Bath, considered Europe’s largest thermal facility, is also located in Budapest.

State Structure: Hungary approved the parliamentary democracy regime with the Constitutional amendment made on 23 October 1989. The one-chambered Parliament consists of 386 deputies elected for a four-year term. In addition to legislative duties, Parliament has the power to determine the internal and external policies of the country.

The President elected by the Parliament is the head of the state and is the representative of the national unity; the democratic functioning of the state machinery; is the commander-in-chief of the armed forces. According to the Constitution, the Presidents can be elected for a maximum of 2 times for 5 years.

In a country without seashore, the continental climate is dominant. The average temperature ranges from -1 to 3 degrees in January, the coldest month, while it is between 19 and 23 degrees in July, the hottest month.

The Christian population is intense. Alongside Orthodox Christianity and Jewish scarcity, there is also a Muslim population.

Tourism: Developing. 2.5 million tourists visit Hungary every year, including Russia and other socialist countries. To improve tourism, winter sports and hot water facilities have been modernized.

Hungary is a wealthy country in terms of heritage. Like most countries, public heritage is not kept in the land but is kept alive by the local communities in the small villages of Hungary. There are many museums and galleries in Budapest and temporary exhibitions. Budapest’s cardholders can benefit from museum discounts.

As the sixth country to win the gold medal in the world in Olympic competitions, Hungary has been hosting the Formula 1 races since 1986. Also, football is one of the most popular sports in the country.