You can see the location of Qatar on the world map below:

The neighboring countries of Qatar (QA) are:

Qatar borders with the Persian Gulf. 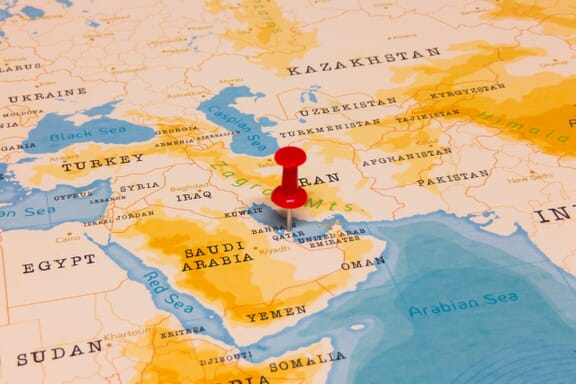 Here are the largest cities in Qatar based on 2021 population data:

Map of Qatar with the Largest Cities

Other Countries in the Middle East Region

Qatar is officially known as the State of Qatar.

The main cities in Qatar are:

Qatar on the World Map

Qatar on the world map shows it occupies a small peninsula that juts into the Persian Gulf. It is bordered in the southwest by Saudi Arabia and in the southeast by the United Arab Emirates.

The Gulf of Salweh is on the southwest between Qatar and Saudi Arabia.

Map of Qatar and Surrounding Countries

A Qatar map shows that the country is one of the seven nations that constitute the Arabian Peninsula, which consists of:

The Qatar peninsula is surrounded by the Persian Gulf in the north and the east. The Gulf of Bahrain separates Qatar and Bahrain. It shares maritime borders with Iran, the United Arab Emirates, and Bahrain.

Qatar prides itself on its tolerance of other cultures and belief systems. The press is essentially the freest in the region. Its population enjoys a modern life with an emir who strives to enhance civil liberties.

The country has a large expatriate community. The emir states this is because “In Qatar, they find security and a dignified livelihood.”

Key facts about Qatar include: