You can see the location of Kuwait on the world map below:

The neighboring countries of Kuwait (KW) are:

Kuwait borders with the Persian Gulf. 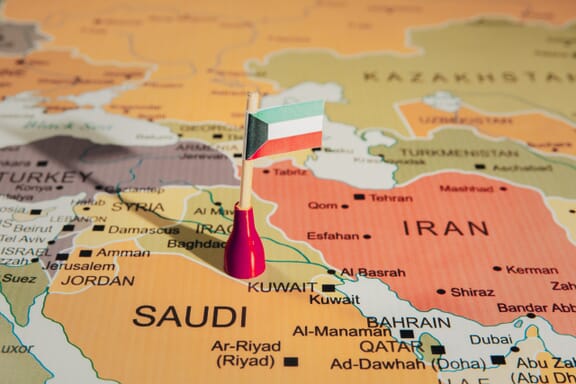 Here are the largest cities in Kuwait based on 2021 population data:

Map of Kuwait with the Largest Cities

Other Countries in the Middle East Region

Who needs renewable freshwater resources or UNESCO World Heritage Sites when you’ve got the world’s most valuable currency? What Kuwait may lack in size, it makes up with some of the world’s largest oil reserves, a unique cultural identity, and by being one of the richest Arab countries. But you might need a political map of Kuwait to know exactly where it is in the world.

Kuwait is a country that lies along the northwestern corner of the Persian Gulf, bordering Iraq and Saudi Arabia. It’s a part of Western Asia and is at the northern border of Eastern Arabia. It shares maritime borders with Iran, which is across the Persian Gulf, and it houses Kuwait Bay.

The color-coded political map of Kuwait above details the country’s international borders, coastline, six governorates, and major cities. It also marks the capital of Kuwait — Kuwait City — with a black star.

From its position in the northeastern corner of the Arabian Peninsula, Kuwait shares land borders with two countries: Iraq and Saudi Arabia. This location puts Kuwait in the regions of Western Asia and the Middle East. Culturally, Kuwait shares some features with other countries in the Middle East such as a strong connection to Islam and being relatively conservative.

Although the country shares some cultural values and traits with other Eastern Arabian countries, Kuwait is also different from its neighbors. There is a larger Western influence on culture in Kuwait than in nearby countries, and it is sometimes considered the most “Westernized” Gulf State.

Its popular culture is exported to other Arab countries in the form of poetry, film, theater, and music, and it is most culturally similar to Bahrain.

The total 2022 population estimate for Kuwait is around 4.6 million, and none of its cities have more than 1 million people. In fact, the capital city has less than 100,000 people living in the city proper. The country is divided into smaller administrative regions called governorates.

The six governorates of Kuwait are:

Kuwait City isn’t the most populous city in Kuwait, but it is the heart of the much larger Kuwait City Metropolitan Area and the capital of the country. It’s located on the shore of Kuwait Bay and it is the political, cultural, and economic hub of the country.

Most Kuwaiti corporations and banks are headquartered in the city, as are many governmental buildings and the Seif Palace.

While the city is now a bustling metropolis, it was a fishing village inhabited by fisherman when it was first founded in 1613. After the Bani Utubs settled in modern-day Kuwait City in the beginning of the 18th century, the city grew rapidly and quickly became a commercial center for the transit of goods between countries in the region.

The city functioned as an important trade center for many years before experiencing economic hardship in the 1930s due to declining pearl trade and a blockade imposed by Saudi Arabia. The city and country then went through a period of economic prosperity driven by oil and a relatively liberal atmosphere.

This is Kuwait’s most populous city. It has a population of almost 400,000 and is located south of Kuwait City near the coast. Founded in 1946, the town was born because of the discovery of oil nearby. It is the capital of the Al Ahmadi Province which was also created in 1946 and was named for Ahmad Al-Jaber Al-Sabah, the Sheikh who ruled Kuwait from 1921 until 1950.

Al Ahmadi is also notable for being the location of the Kuwait Oil Company headquarters, the world’s fifth-largest exporter of crude oil. The town also has several gardens, sports facilities, and a golf course.

Hawalli is a large settlement near Kuwait City that was established in the 7th century around fresh water wells that existed at the time. The name Hawalli comes from an Arabic phrase that translates to “the fresh water for me.”

Today, Hawalli is known for being the commercial center for computer-related goods in the country. It’s also where you’ll find Mohammed Al-Hamad Stadium, one of Kuwait’s most famous football stadiums, and the Qadsia SC football team. Hallawy Park, a popular theme park, and the Muhallab Mall are other attractions.

The settlement was previously home to many displaced Palestinians, but their numbers decreased during and after the Gulf War. Since the war, the area has been populated with many people from other Arab nations such as Egyptians, Syrians, and Lebanese. It is the second most populous city in Kuwait with a population of about 220,000.

This area of  the Mubarak Al-Kabeer Governorate of Kuwait has the third-largest population in the country: around 139,163 people. It’s part of the larger Kuwait City Metropolitan Area and southeast of Kuwait City proper. There is a pretty even split between the Kuwaiti and expatriate populations in Sabah Al-Salem; Kuwaitis make around 57% of the inhabitants.

The area of Sabah Al-Salem is divided into 13 blocks which are made up of residential and commercial areas. International fast food chains can be found here, as can gyms, apartments, hospitals, schools, football fields, and other amenities.

Of the six governorates in Kuwait, Al Farwaniyah is the most populous. The district of the same name in this governorate has a population of roughly 136,000 and is one of Kuwait’s largest residential areas. There are also important commercial activities that take place here, and mosques, hospitals, a university, park, and other community resources.

Fahaheel is located directly east of Al Ahmadi and is on the Persian Gulf coast. Located on the seashore of this area is the Fahaheel Fish Market, which is known as one of the most important fish markets in Kuwait. In addition to this traditional fish market is the Al Kout Mall, which includes products from international brands as well as a traditional market.

Kuwait is mostly desert with the exception of the Al Jahra Oasis, which is located in near the westernmost point of Kuwait Bay. There are few other fertile patches throughout the country and no renewable sources of freshwater. There are, however, desert basins in the country that periodically fill with winter rainwater. These were historically important watering places.

The total area of Kuwait is 17,818 km2 (6,880 mi2), and the elevation range throughout the country is quite shallow. The coastal areas are at sea level and there is some uncertainty regarding the highest point in the country, though Mutla Ridge is named by some as having the highest elevation at 140 meters (461 feet).

Most of the terrain in Kuwait is sandy, and soil for agriculture isn’t widely available. Widespread damage to the desert’s surface layer during the Persian Gulf War has loosened sand deposits that lay under the surface and has increased the number of sand dunes around the country.

Kuwait has an extreme climate. It’s considered a hyper arid desert climate due to the drastic lack of rainfall. During the summer season, which is long, hot, and dry, there is no rainfall and temperatures can climb to 45°C (113°F). Kuwait City is one of the hottest cities on earth during the summer. The cool season in Kuwait lasts for just three months and the coldest month is January.

Kuwait has one of the strongest economies on the planet. In terms of gross national income per capita, it is the fifth-richest country in the world. The biggest industry contributing to Kuwait’s economy, by far, is the production of petroleum products. The next biggest industry in the country is steel manufacturing.

In addition to oil and steel, Kuwait’s other major exported products are aircraft and spacecraft, organic chemicals, plastics, and machinery.

The Kuwaiti Dinar is notable for being the most valuable unit of currency in the world. The Dinar was first brought into circulation in 1961 to replace the Gulf rupee, was shortly replaced by the Iraqi dinar during the Iraqi occupation, and then was restored after the country’s liberation.

While the bulk of Kuwaiti wealth comes from the production of non-renewable energy resources, environmental sustainability and renewable energy are two areas the country is focusing on for the future. Biofuel and clean fuel projects have been conducted in the country, and it’s also got one of the world’s largest ecologically sustainable sewage treatment plants.

Kuwait also opened Shagaya Renewable Energy Park, its largest renewable energy park, in 2019. It uses a variety of renewable energy production methods and is set to eventually be one of the largest in the world.

The largest expatriate community in Kuwait is of Indian origin, and the second largest is Egyptian. Considering the high number of expatriates as a problem, the government of Kuwait has increased deportations recently.

The vast majority of Kuwaitis in Kuwait are Muslim and about 75% of the country’s total population identifies as Muslim. As with other Middle Eastern countries, Islam has a strong influence on the culture of the country, which is quite conservative. The official language of Kuwait is Arabic.

Kuwaiti culture is centered around conservative values and traditions, and strong communal ties between family, neighbors, and friends are of great importance.

The society is traditionally male-dominated although there are more females in the workforce. Purchasing alcohol, living together as an unmarried couple, homosexual acts, and pork products are all illegal in the country.

There are a number of beautiful buildings in this country that make up some of the reasons to visit Kuwait. The Seif Palace and Grand Mosque are conveniently located right next to each other and are both spectacular sights.

The palace features a visually striking watchtower with a ceiling made of white gold, and has served as the primary house of government in the country since the 19th century.

The Grand Mosque attracts visitors from all over the world and covers an impressive 46,000 square meters (495,140 square feet). It is the largest mosque in the country. It was constructed in 1986, features 44 windows, and is an important cultural and religious symbol for Kuwaitis and muslims.

Is Kuwait a rich country?

Is Kuwait a peaceful country?

Along with Qatar, Kuwait is considered one of the safest countries in the Middle East and North Africa region. The country has low crime rates and the risk of falling victim to crime as a tourist is very low. The US Department of State has given Kuwait its safest travel advisory category.

Can you drink alcohol in Kuwait?

What is not allowed in Kuwait?

Since Islam has a strong influence on Kuwait law and culture, the society is fairly conservative and there are a variety of activities and goods that are prohibited. Some things that are legal in other countries but not allowed in Kuwait are alcohol, homosexuality, unmarried couples living together, pork products, and sex outside of marriage.

Is Kuwait an Arab country?