You can see the location of Peru on the world map below:

The neighboring countries of Peru (PE) are:

Peru borders with the Pacific Ocean. 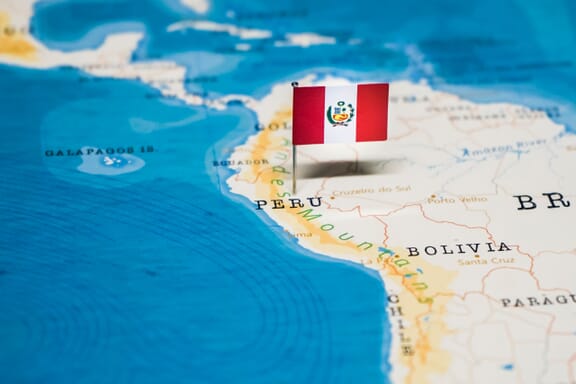 Here are the largest cities in Peru based on 2021 population data:

Map of Peru with the Largest Cities

Other Countries in the South America Region

Peru on the World Map

In a map of Peru with cities, the capital city of Lima is marked in capital letters. Lima was founded in 1535 and is the gateway to all regions in the country.

Map of Peru with Regions and Cities

The map of Peru has changed since the time of the Inca Empire. Now Peru maps have twenty-five regions that each make up a country of nearly 33-million people.

The largest region in Peru is the Loreto region that encompasses parts of the Amazon Rainforest. Peru’s smallest region is the richly biodiverse Tumbes, a beach town that borders Ecuador.

The 25 Regions of Peru

The Amazonas region of Peru borders Ecuador and is found on Peru maps in the north between the Loreto, San Martín, and Cajamarca regions. Chachapoyas is the capital city of the Amazonas region. It is well known for the nearby Gocta Waterfall, one of the world’s largest waterfalls.

The Ancash region spans from the Pacific coast to the snow-capped Cordillera Blanca mountain range. This area of Peru has scenic landscapes that draw in hikers, archeologists, and glaciologists. The regional capital city in Ancash is Huaraz which sits over 9,800 feet (3,000 meters) above sea level.

Apurímac is a region in southern-central Peru bordered by Cusco, Ayacucho, and Arequipa. The regional capital city is Abancay however, Andahuaylas is second in this region for population density. The entire Apurímac region has a total population of approximately 430,000 citizens.

Arequipa is a region of southern Peru that spans from the Pacific Coast to the Andes Mountains.

The regional capital city bears the same name as the region and is nicknamed the “White City” for the white sillar stone used in its construction. Arequipa city is the second-largest city in Peru. Nearby, the Colca Canyon is the second largest canyon in the world.

The historical city of Ayacucho is in the Ayacucho region of south-central Peru. Ayacucho is famous for the Battle of Ayacucho in 1824, where South American soldiers fought for independence from the Spaniards. Peruvians gather here en mass during Easter holidays for lively parades with religious statues and fireworks.

The Cajamarca region in Peru borders Ecuador and is next to the Amazonas region on the Peru map. Cajamarca city is the regional capital city. This city is historically significant as the place where the last Inca king, Atahualpa, was imprisoned, marking the end of the Incan reign.

Callao is a region and city located along the Pacific Ocean and close to the capital city of Lima. It is a major port city and the location of the Jorge Chaves International Airport. Anyone coming to Peru will land in the Callao region, flying over freighter boats and warehouses before touching down.

The Cusco region is found in the central-southern part of Peru maps. This region is part of the Andes Mountain Range.

The regional capital city of Cusco is one of the most visited cities in all of Peru. Cusco’s main plaza is a UNESCO World Heritage Site. Historically it is significant as the home of the Incan Empire and the gateway to the World Wonder of Machu Picchu.

Huancavelica is a region and city in Peru founded in 1572. Huancavelica is located south-east of Lima and bordered by the Junín, Ayacucho, Lima, and Ica regions.

Most of the residents of Huancavelica speak the Quechua language as this region has strong ties to the indigenous Quechua heritage.

The Huánuco region of Peru is located inland next to the Ancash region. The regional capital city is Huánuco city and has a population of 146,750 as of 2021. The Tingo Maria National Park and archeological ruins of Huanuca Pampa have put this region on the map for tourists.

Ica is a region of Peru located along the coast of the Pacific Ocean and near Lima.

The regional capital city is Ica, but travelers are drawn to the small town of Nazca to view the historical geoglyphs called the Nazca Lines. Others flock to the biodiversity of the Paracas National Reserve and Ballestas Islands. The city of Pisco in Ica is where the Peruvian drink of the same name is said to have originated from.

Junín is a region in Peru found east of Lima. The region is composed of central highlands and the western part of the Peruvian Amazon. The regional capital city of Huancayo is home to a population of nearly 400,000 people as of 2021.

La Libertad sits on the map of Peru between the Ancash region and the region of Cajamarca. The capital city is Trujillo, Peru is considered to be the origin place of the marinera dance. Many historical ruins are in this region including Chan Chan and the El Brujo Archeological Complex.

Lambayeque is a region found on Peru maps on the northwestern coast between La Libertad and Piura regions.  Chiclayo is the regional capital city of the Lambayeque region in Peru. This region was once of importance to the Moche culture. Visitors to the Lambayeque region can see the mummified remains of the Lord of Sipan and his tomb.

Lima city is the capital city of the country. It is the most populated region found on Peru maps. Lima is a gastronomic epicenter with some of the world’s best chefs having highly rated restaurants here. The Downtown Historic Center is a UNESCO World Heritage Site and is where the government palace is located.

Despite Loreto being the largest region in all of Peru, it has a low population. Most of the landmass of the Loreto region is composed of the Amazon Rainforest. Iquitos is the regional capital city of Loreto. Considered the gateway to the Amazon, Iquitos is where tourists travel to visit remote Amazon lodges.

Pasco is the region found in the center of Peru maps. The capital city Cerro de Pasco has an altitude of 14,210 feet above sea level (4,330 meters) atop the Andes mountains, making it one of the highest cities in the world.

The Piura region is found in the northern part of Peru maps, directly below the Tumbes region. While Piura is the capital city with picturesque colonial architecture, many people flock to this region of Peru for the coastal beaches in Mancora and Cabo Blanco.

Puno is a region in southern Peru bordering Bolivia. This region is famous for Lake Titicaca, the highest navigable lake in the world. Puno city is the regional capital city located on the shores of Lake Titicaca and is home to the lively Candelaria Festival every February.

San Martín is a region in northern Peru and part of the Peruvian Amazon Rainforest. The capital city of San Martín is Moyobamba, famous for its wide variety of orchids. However, Tarapoto is the most populated city in the San Martín region, with nearly 115,000 citizens.

Tacna is the southernmost region of Peru, bordering Chile and Bolivia. With over 325,000 people living in the region, Tacna is Peru’s tenth most populous region. The reason for such a large population in such a small region is that it is part of a duty-free zone, drawing in many businesses.

Tumbes is the northernmost region of Peru. It shares its border with Ecuador and has a population of approximately 95,000 citizens.

Tumbes is a coastal region and home to the National Reserve of Tumbes. This area is protected for its diverse ecosystems. Standing guard on the high banks of the Tumbes River is the regional capital city of Tumbes.

The Ucayali region borders Brazil and is the second-largest region on Peruvian maps. This region is part of the Peruvian Amazon Rainforest and has a population of nearly 500,000.

The regional capital city is Pucallpa, a city located on the Ucayali river that gives this region its name.