France is located in the Western Europe region at latitude 46.227638 and longitude 2.213749 and is part of the European continent.

You can see the location of France on the world map below:

The neighboring countries of France (FR) are:

France borders with the Mediterranean Sea, the Atlantic Ocean, the English Channel, the Indian Ocean, and the Pacific Ocean. 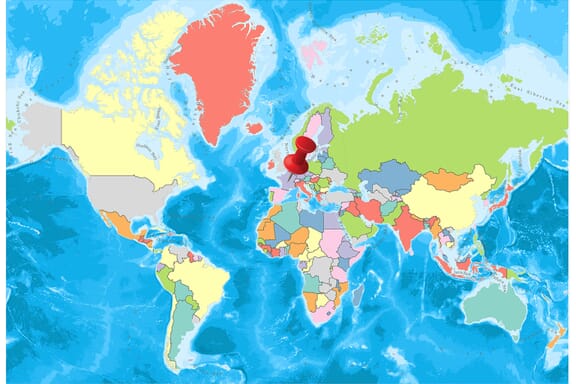 Here are the largest cities in France based on 2021 population data:

Map of France with the Largest Cities

Other Countries in the Western Europe Region

Of the 18 regions in France, 13 are metropolitan areas. Before the 2016 reform, the total number of districts was 27.

The regions are located at the top of the administrative structure in France. The main areas are separated from 4 to 13. Corsica is not actually a region and has special status but is defined as a region in everyday life. The regions are at the same time geographical divisions with social and cultural identity integrity.

Below you can see the map of France’s Metropolitan Regions.

With its blue, white, red striped flag, France, which has declared itself as the principle of the country of freedom, equality, and brotherhood, has a top spot in world culture, civilization, and political history.

The city of lovers Paris is one of the world’s number one honeymoon destinations and one of the most important tourist destinations. France has become an important actor in the most turbulent political events of Europe.

It is surrounded by Western Europe, Luxembourg, Belgium, and the March Sea in the north, the Atlantic Ocean and the Bay of Biscay in the west, Spain and the Mediterranean in the south, Italy, Switzerland, and Germany in the east.

France has two coastlines, one in the North Atlantic Ocean and the other in the Mediterranean Sea.

The total coast length is 3,427 kilometers. Two-thirds of France’s interior consists of plains and small hills.

These hills extend to the Pyrenees Mountains, which form a natural border between France and Spain in the south. The mountains between Spain and France can be up to three thousand meters high.

Mont Blanc in the Alps has the highest mountain title of France with a height of 4,807 meters. Mont Blanc is also the highest peak in Italy. The longest rivers in the country are Loire, Seine, Garonne, and Rhone. The Rhone River forms a 160-kilometer border with Germany in the east. The Seine and Garonne rivers are the two main rivers that the country uses for transportation.

The French Republic is a unitary state with a long history of democracy, governed by a semi-presidential system. The Constitution of contemporary France, the Fifth Republic of France, was endorsed by a popular vote carried out on 28 September 1958.

This constitution contains legislation that increases the authority of the president of the state in comparison to the parliament. In France, there are two parts of the state administration: the President of France and the Government.

The president of the country is elected for five years (formerly seven years) by all voters who have completed the age of 18 nationwide and have the right to vote. The government is headed by a prime minister appointed by the president.

The climate of France varies according to the regions, the ocean and the Mediterranean climate are the most active climates. The oceanic climate is generally observed in parts of Brittany and Normandy, and also in the northern and western parts. In the ocean climate, there are rainy seasons all the while the winters are quite cool in warm weather. Winter is snowy and summers are warm and rainy in the inner parts of the country.

France is a secular country in which the freedom of belief is constitutionally guaranteed. According to the results of a survey carried out in January 2007, 51% of the French have associated themselves with Catholic sect, 31% are agnostic or atheist, 10% believe in other religions, 4% belong to Islamic belief, 3% from the Protestant sect, 1% Jewish, and 1% Buddhist.

France is one of the economically strong countries of Europe. France ranks first in the European Economic Community with the abundance and diversity of agricultural products and fourth in terms of dairy products. At the same time, the industry is very strong. The industry meets more than 80% of the country’s income and trade income. Since the early 1990s, the state has begun to dismiss other industrial interests such as France Telecom, French Airlines, and banks. High unemployment is still a problem for France.

Thanks to its historical and natural beauties, it is very developed in terms of tourism. Eiffel Tower has become the symbol of the country and visited by millions of tourists every year. Notre Dame Cathedral in Paris is a must see place. The Mona Lisa of Leonardo Da Vinci is also in the Louvre Museum, the most important museum in the country.

The culture of the country is shaped by the waves of migration from the past, international relations and geographical location. Paris, the capital of the country, is in the first place in terms of culture and art. Paris is the foremost center of both the world and Europe. From France, he has produced many fashion designers, artists, and writers. These changes made it possible for the country to appear in different traditions day by day.

There have been many contributions to the literary genres in the country on fiction, drama and lyric poetry. French literature has also contributed to the study of the authors of many countries and has become an example. From 1600 years onwards, it has contributed to the work of authors such as France Realism and Symbolism, allowing them to be influenced by surrealism and existentialism.

In France, the sport is at the center of attention. Especially football is the most preferred spore in the country. On the player’s list of the FIFA century, France is the second country. The country has developed almost all kinds of sports except this sport. For example, rugby has popularity close to football, especially in the south of Paris and France. The national rugby team has participated in every Rugby World Cup and participates in the Six Nations Championships. The French national team won sixteen Nations Championships and reached the finals once in the Rugby World Cup.

French Currency / What is the Currency of France?

The currency of France is the Euro.

France has been using the euro since 2002. The mark of the euro is € and the code is EUR. The currency of the country before 2002 was French franc.

In the Eurozone transition phase, conversion from 1 Euro to 6.55957 French franc cross exchange rate was provided. 1 Frank is 100 centimeters. The French franc was also used as reserve currency in the world. The reserve was in the fifth place after the US dollar, the German mark, the British sterling, and the Japanese yen.

From 1 January 2002, France began using the Euro. In 2002, the euro was the currency of choice in Germany, France, Belgium, the Netherlands, Luxembourg, Ireland, Spain, Portugal, Italy, Greece, Finland, and Austria.

The euro is the common and monolithic part of the European Monetary Union, the last stage of the Common Market system that European countries have established to grow the welfare level.

What is the Official Language of France?

French is official in 29 countries. La Francophonie is a Francophone French-speaking nations’ community. It is official in all the sub-offices of the United Nations and in the majority of international organizations.

French is the third most popular language after English and German language in the European Union.

The fact that the origin is Latin, has influenced the alphabetical features of French and sentence structure and facilitated its adoption by large masses. The alphabet contains 26 letters from the Latin alphabet.

Also, syllables are letters in some cases. A letter may not always mean a character. This situation depends on the meaning of the text and the type. In French, the letters “e” and “r” are frequently in use. In addition, vowels often use a hat. Most hat phrases are on the letters ” e ” and ” a ”.

It is among the rare European languages that require the use of the throat. Sentence structure is in the form of subject, predicate and object respectively. Particularly in short questions.

Because it is under the influence of various European languages, there are plenty of similar words in the English and Spanish languages. Those who are eager to learn the French language must first assimilate the alphabet in a good way. There are differences between the spelling and the reading of the letters in the alphabet.