What is the Polish Flag?

The flag of Poland consists of two equally sized horizontal banners. The top banner is white, and the lower banner is red. The flag is similar to those used by Monaco and Indonesia, but the colors are reversed.

The Polish flag is an important symbol of national identity and has been the country’s official flag since 1919. The colors are said to represent freedom and purity in white, and the blood of martyrs in Poland’s war of independence is represented in red. White and red were also common colors for flags and emblems in this region.

Another flag, the national flag with the eagle coat of arms in the middle of the white banner, is used by certain government bodies and also abroad.

Why is the Polish flag red and white?

The Polish flag colors have a long history with Poland and its coat of arms; red and white are the national colors of Poland. In the 14th century, a red banner with a white eagle was the flag for Poland, meaning these colors have been important to the country for at least seven hundred years.
White is a symbol of hope, peace, and nobility. Red is said to represent fire and the blood spilled in the struggle for independence.  It’s also true that obtaining the dye for red fabric was difficult and expensive, which created a link between the color and wealth and the royal court.

What are the rules for flying the Polish flag?

There are several customary guidelines for handling and displaying the Polish flag, but these are based on customs and are not legally binding. The only law related to the proper use of the flag states that the flag must be treated with respect.
Some specific guidelines for handling and displaying the flag are as follows:
– The flag should be raised before 8 a.m. and lowered before sunset.
– The flag must not touch the ground or water.
– The flag must always be cleaned and ironed.
– Public destruction or desecration of flag is not permitted; it should be split to separate the colors and then burned.
– The flag should not be flown in extreme weather conditions.

Who can fly the Polish flag?

As of 2004, any person can fly the Polish flag as long as it is done respectfully. Before 2004, Polish citizens only were allowed to fly the flag during national holidays. Today, the flag is popularly flown during national and cultural events.
Legally, the use of the flag with the coat of arms is only granted to specific entities, such as embassies, airports, and seaports. In practice, this rule is often ignored and the flag with the coat of arms is treated the same as the national flag.
Many state institutions are legally required to fly the national flag of Poland on four flag-flying days throughout the year, and government buildings are required to fly the flag in front of their buildings throughout the year.

How old is the Polish flag?

The Polish national flag is 103 years old. Although the red and white colors had been used prior, it was in 1919 that the national flag of Poland was officially designated. This was almost one year after Poland had won independence.
The design has remained mostly unchanged since then, although the years between 1939 and 1944 saw the disappearance of the national flag while under the control of Nazi Germany.
Although the flag that features the coat of arms was also officially designated in 1919, the coat of arms itself first appeared in the 13th century. It was an emblem used on the shields of Polish soldiers to help identify them on the battlefield. This symbol was reintroduced after World War I.

What is Polish National Flag Day?

Polish National Flag Day is a holiday celebrated on May 2nd each year in Poland. It’s been an official holiday since 2004 and is the day in 1945 when Polish soldiers in the Battle of Berlin mounted a flag on the Reichstag. May 2nd is also the day when Polish people living abroad are celebrated.
This holiday falls between two others: International Workers’ Day on May 1st and Constitution Day on May 3rd. Flags can be seen from public institutions and houses on this day, and they’re even passed out on the street.

Why do some Polish flags have an eagle? 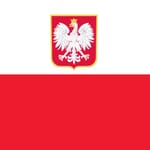 The Polish flag with the eagle is the flag that bears the country’s coat of arms. In practice, these two flags are often used interchangeably. Legally, however, there are different legal restrictions on the use of each.
The Polish flag that bears the coat of arms is restricted to the use of certain official Polish bodies abroad or at sea. This restriction is not always observed, and the flag with coat of arms is displayed typically by the Polish diaspora.

History of the Polish Flag

The national flag of Poland as it is known today was officially designated on August 1, 1919. However, the colors of red and white have been used in the region for many more years, and use of the coat of arms was first recorded in Poland in the 13th century.

The coat of arms consisting of a white eagle on a red shield is a design that was originally used on the shields of Polish soldiers. Early Polish flags simply transferred this emblem design to banners. Nationalist organizations revived these designs after World War I.

A flag with the eagle coat of arms was ultimately not approved, and the simple design of a white, horizontal banner atop an equally sized red banner was agreed upon in 1919. Although Poland has since been under the influence of Nazi Germany and Soviet Russia, the national flag of Poland has remained mostly unchanged.

Poland’s holiday for celebrating its flag, Polish National Flag Day, takes place on May 2nd every year and was established in 2004.

Poland is a country in Central Europe that shares land borders with seven different countries: Germany, Czech Republic, Slovakia, Ukraine, Belarus, Lithuania, and Russia. It is also bordered by the Baltic Sea in the north.

There are many reasons to visit Poland, and the country welcomes millions of tourists each year. The interesting history, architecture, and natural beauty are some of the top attractions. There are also 17 World Heritage Sites in Poland.

Poland has been a member of the European Union since 2004, but it has not adopted the Euro. Instead, it maintains the circulation of its own currency, the Polish Złoty. It also has one of the fastest growing economies in the union. The service sector employs the majority of employed Polish citizens.

Nearly 35% of the Polish territory, which consists of forests, has been completely dedicated to agriculture, and only 15% of the land is divided into cities. There are thousands of lakes of all sizes and 23 national parks. There are hundreds of European bison in the 150,000-hectare Bialowieza forest in Poland, which hosts the largest ruminant population in Europe.