The map above shows the Micronesia subregion of Oceania, located in the Pacific Ocean to the northeast of Australia, which includes thousands of islands and several countries. One of these countries, the Federated States of Micronesia, is also referred to as “Micronesia.”

The Federated States of Micronesia consists of 607 islands spread across a region of the Pacific Ocean, located in Oceania. The total water area covered by these islands is huge, over 2,600,000 km2 (1,003,866 mi2).

Though the country of Micronesia includes hundreds of islands, only 65 are inhabited by people.

The country is made up of four states: Yap, Chuuk, Pohnpei, and Kosrae, each of which is represented by a star on the flag of Micronesia.

Some travelers may be attracted to Micronesia simply because it doesn’t get as many tourists as more popular travel destinations, but the tourist attractions in Micronesia are some of the most interesting in the world. World-famous diving, ancient cultures, and fascinating landscapes are just some of what the country has to offer.

There is also a fair amount of diversity among the nation’s islands, lagoons, and atolls. You’ll find land that is elevated and mountainous in some places and mostly flat coral islands in others.

In 2019, around 18,000 tourists visited Micronesia. That number has dropped since the onset of the COVID-19 pandemic, tourism in Micronesia is expected to continue to grow.

Where are the Marshall Islands located?

The Marshall Islands are located within the Micronesia subregion of Oceania, east of the Federated States of Micronesia. They consist of five islands and 29 coral atolls. Two other countries in this region are Palau and Nauru.

Is Micronesia a country or region?

What’s the difference between the Federated States of Micronesia and Micronesia?

Is it safe to travel to Micronesia?

It is mostly safe to travel to Micronesia, and visitors should exercise normal safety precautions. Following local dress standards, which are fairly conservative, is important. It’s also important to follow local advice when swimming or spending time in the water.

What is the average per-capita income in Micronesia?

The average income in Micronesia is 3,476.7 USD per year (says the most recent World Bank data).

Which Micronesian islands are part of the United States?

In the region of Micronesia, the Northern Mariana Islands, Guam, and Wake Island are all US territories. The country of Micronesia is an independent nation, but it has signed a Compact of Free Association with the United States.

What’s the currency in Micronesia?

The currency used in Micronesia is the US dollar.

What languages are spoken in Micronesia?

The official language in Micronesia is English, and the recognized regional languages are Chuukese, Kosraean, Pohnpeian, and Yapese.

Do travelers need a visa to enter Micronesia?

Visa requirements for travel to Micronesia vary by country of citizenship. Citizens of the USA, EU, Australia, Canada, and the UK do not need a visa for stays of up to 30 days. A return ticket and passport are required for all foreign visitors.

What are the main airports of Micronesia?

Located on Pohnpei Island, Palikir is the capital of Micronesia and has a population of about 5,000. The city covers an area of approximately 107.4 km² and is surrounded by heavily wooded forest.

For much of its history, Palikir was a tiny village without great significance, and the island of Pohnpei was ruled by tribal chiefs. Before Micronesia’s independence in 1979, the islands were under the control of various other nations, including the Spanish and German. Palikir became the capital city of Micronesia in 1989.

Palikir is not the most populous city in Micronesia, but it is the center of federal administration in the country and where the president’s residence is located. It’s also one of the most-visited cities by tourists. Shopping and entertainment options are two elements that draw people to Palikir, in addition to the nearby natural wonders.

About 100 people live in the Pakin Atoll, which consists of 16 low islands and is located on the northwest coast of Pohnpei. The beaches, swimming, and snorkeling are all superb in this location. Arriving at the atoll is fairly difficult, unfortunately, and requires waiting for high tide. The diving here is excellent.

Nan Madol, located in Pohnpei, is an archaeological site that was the capital of the Saudeleur dynasty until 1628. The site consists of large stone ruins that are connected by canals, and it’s one of the most visited places in the country. In 2016, the site was added to the UNESCO World Heritage List, and some even refer to the area as the eighth wonder of the world.

Located at Chuuk Lagoon, Kuop Atoll is a marine protected area full of wildlife. There are even some coral species living here that don’t exist anywhere else in the world. Some of the animals that can be found here include both hawksbill and green sea turtles, mantas, and sharks. Nature lovers and those looking to experience a remote part of the world will find what they’re looking for here.

Eten Island is an important historical site and popular tourist destination in Micronesia. It is part of the Chuuk Lagoon and is located just south of Dublon Island. One of the attractions of the island is the remnants of Japanese military structures and the Japanese airstrip, all built during World War II.

The Japanese bulldozed a great portion of the island, and their structures suffered extensive damage during the war. Wrecked aircraft and other military buildings and vehicles can be found on the island and under the water near the island.

This is the largest island of Micronesia, the most populous, and the best developed. It’s also one of the easiest to reach via international travel. The nation’s capital, Palikir, is located here, as is Kolonia, the capital of the state of Pohnpei.

Diving, hiking, surfing, and swimming are just some of the activities visitors can enjoy on this island. It also offers great access to other islands in the country. A trip to Pohnpei makes sense for just about any journey to Micronesia.

The Blue Hole is just off of Kosrae Island, in the southernmost part of the country. This is a large hole in the reef with calm waters and plenty of hiding places for tropical fish. This makes it an ideal snorkeling location for visitors of any skill level.

In addition to tropical fish, stingrays and eagle rays call this place home, and they shouldn’t pose any risk to visitors. It is also here that the remains of Kosrean Kings were deposited in the past.

Located on Lelu Island, the Lelu Stone Ruins is an archaeological site that includes stone walls from a civilization that was at its most powerful during the 14th and 15th centuries. In addition to stone walls, visitors will be able to see the remnants of royal tombs, holy places, and residences. The site is roughly three meters above sea level and is a popular tourist site.

Located on the island of Pohnpei, Kepirohi Waterfalls is certainly the most visited waterfall in the country. There is a well-maintained walking path that leads to the falls, making it an easily accessible attraction. It’s also located near the Nan Madol ruins, making it easy to combine the two.

Tonnachau Mountain, located on Weno Island in the country’s Chuuk province, is a volcanic mountain with a height of 340 meters. It is one of the most important tourist destinations on the island and holds archeological significance as well as importance to Chuukese culture.

Rai stones, also sometimes referred to as “Yap Stones,” are large stone artifacts that can be found on Yap Island. The stones are large circular pieces of limestone that reach sizes of up to 3.7 meters (12 feet) in diameter and are thought to have been used as a type of currency. This would make them the world’s largest currency.

Since some stones were too heavy to be easily transported, ownership was thought to have been transferred from person to person by altering the oral history related to the stones.

The Tamilyog Trail is something that will appeal to any hiking enthusiasts or nature-walk lovers. It is a trail that connects the east and west sides of Yap Island and was historically the best way to cross the island. The trail was mostly abandoned after the introduction of vehicles and the road that runs around the island, but it has been reopened and is a wonderful way to explore the island on foot.

There are various petroglyphs inscribed into rocks on the island of Pohnpei, and they make a popular attraction for visitors to Micronesia. The largest and most famous collection of petroglyphs is on a basalt outcropping called Pohnpaip, which means “on the boulder.”

Who created these petroglyphs and how long ago is still unknown, but it is not a common phenomenon in Micronesia. Accessing the site is best done on foot, and a small entrance fee is usually required.

This is a site worth visiting for war buffs and cave enthusiasts alike. Nefo Cave is 23.8 meters (78 feet) long and was used along with other caves by the Japanese military during World War II. The cave is easily accessible, and it’s possible to explore its length on foot. Many soldiers lived in this cave during the war, and there is still a large artillery gun that has been preserved since the war.

This museum is located in Kolonia on the island of Yap and is dedicated to Yapese culture. In addition to a climate-controlled building for collections, the museum consists of four traditionally built houses. The museum is also where several annual events take place, such as the Canoe Festival, Homecoming Festival, and Yap Day.

This is one of Micronesia’s best-known geographic features, and it can be found on the mountainous Sokehs Peninsula on the north coast of Pohnpei. Not only is it a visually impressive feature of the island, but it’s also connected to some important history; the rock was the location of the Sokehs Rebellion against German rule in 1910.

There is a hike that leads to the base of the rock, and it is possible to climb to the rock’s summit in favorable weather conditions.

Chuuk Lagoon is an ideal diving spot. The surrounding reef protects the lagoon from strong ocean currents, making the location suitable for divers of many skill levels.

The 60+ World War II wrecks that live on the ocean floor in this lagoon are highly popular with divers; they make it one of the premier wreck-diving sites in the world.

This is a perfect destination for travelers looking to get away from it all. It is a tiny islet located in the southwestern portion of Pohnpei’s barrier reef, and it’s equipped with small huts for those interested in staying overnight. Diving and amazing snorkeling are two activities visitors can get up to on Black Coral Island.

Snorkeling and diving are the water sports that get all the attention in Micronesia, but there are also fantastic opportunities for anyone interesting in exploring via kayak. It’s possible to book kayak tours with knowledgeable guides that will lead you through mangrove channels and to various islands, or you can rent your own. Both Pohnpei and Yap have tour organizers.

The tropical waters around Micronesia are teeming with interesting fish. A chartered fishing tour is a popular activity for visiting anglers and offers the opportunity to catch impressive fish like the giant trevally. Tuna, marlin, and mahi-mahi are other big catches that can be found in the area. 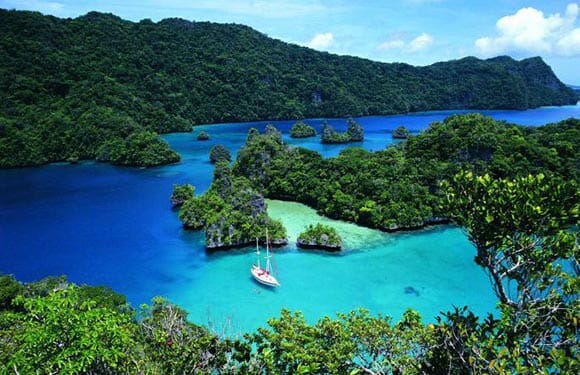