Colors and the Meaning of the Denmark Flag

The flag of Denmark is the oldest continuously used flag in the world and is also known as the Dannebrog. It features a red background and an off-center white cross. The shape is similar to almost all other Scandinavian countries, which may have been influenced by Denmark.

The most famous origin story of the Danish flag is a legend that states the flag fell from the heavens during a battle in 1219, helping lead the Danes to victory. There is evidence that the flag design was common during this time, but this origin story is important to Danish history and culture.

As for the meaning of the symbols and colors on the Danish flag, the white cross represents Christianity, and the red background is symbolic of battle. The colors red and white have also been used by the kings of Denmark for thousands of years.

How old is the flag of Denmark?

The Danish flag is over 800 years old. This makes it the oldest continuously used flag in the world, and it’s a source of pride for many Danes. Historians and popular legend cite the Battle of Lyndanisse in 1219 as the event where the flag first came into use.
The legend involves the flag falling from the heavens during battle, but even if the details of the event are up for debate, it is widely agreed upon that the flag of Denmark was introduced around this time. The 800th birthday of the Dannebrog was celebrated on Valdemar Day, June 15 in 2019.

What is the Nordic cross?

The Nordic cross, also referred to as the Scandinavian cross, is a slightly off-center cross on a background of a different color. The cross can be seen on the flags of most other Scandinavian countries and appears in different regions around the world.
This type of cross may have existed in other parts of the world for a long time, but it is generally agreed that Denmark was the country to bring the symbol to Scandinavia. The cross symbolizes a link to Christianity, as it looks like a religious cross turned on its side.

When do people fly the Danish flag?

The flag of Denmark can be seen all around the country at nearly all times of year. Private use of the flag is permitted, and people fly the Dannebrog for birthdays, anniversaries, special occasions, and festivals.
There are also currently 15 annual flag days on which military buildings in Denmark are required to fly the Danish flag. These include days such as royal birthdays and national holidays. The Faroese flag is also flown on Faroe Islands National Day, and the Greenland flag is flown on Greenland’s National Day.

What are the rules for flying the Danish flag?

As with many national flags, there are some rules that must be followed when flying Denmark’s flag. Some of these are:
– The flag must be replaced as soon as it becomes worn or frayed.
– When a flag is taken down and moved to storage, it must be wrapped so that the white cross is inside the red cloth.
– The flag may only be disposed of by ceremonial burning.
– The flag should be lowered at sunset.
– Care should be taken that the material of the flag never touches the ground.

Why are there different flags in Denmark? 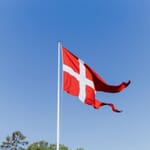 In addition to the Dannebrog, the standard national flag, Denmark has two other similarly designed flags: the Splitflag and the Orlogsflag. These flags have the same design of a white Nordic cross on a red background, but they also feature a swallow tail.
The Splitflag may only be flown by the Royal Family and some other special institutions, and the Orlogsflag is only to be flown by the Royal Danish Navy. These two flags can be distinguished by the slightly darker shade of red used on the Orlogsflag.

Does Greenland have the same flag as Denmark?

Greenland does not have the same flag as Denmark. Despite being part of the realm of Denmark, it is a country with its own local government and has its own flag.
The Greenland flag does use the same colors as the Danish flag, but it is the only Scandinavian country that does not use the Nordic cross. Instead, it features two horizontal bands of red and white, with a disk slightly off-center. The difference from other Scandinavian flags represents the country’s political freedom.

History of the Denmark Flag

The history of the Danish flag is widely thought to be the oldest of any continuously used flag in the world. The most common starting point for examining the flag’s history is 1219, which makes the flag more than 800 years old.

In the 1219 Battle of Lyndanisse, what is now Tallinn, Estonia, legend has it that the Dannebrog saved the Danish army and led them to victory. One of the popular accounts of this event states that the flag fell from the heavens at a crucial moment, when the Danes were losing badly to the Estonians on the battlefield.

Once the flag fell, the King of Denmark showed it to his troops, who were encouraged enough by this site to fight back against the Estonians and win the battle. A great accompaniment to this popular story is the famous 1809 painting by C.A. Lorentzen titled “Dannebrog falling from the sky during the Battle of Lyndanisse.”

Although it is loved by many, the story also sounds implausible to most historians. One possible explanation is that there was simply confusion on the battlefield that led to the story told today.

The white cross on a red background is a symbol that originated during the age of the Crusades in the 11th to 12th centuries and was used by a variety of groups. It was also used as the war flag of the Holy Roman Empire.

The Dannebrog was later used as a maritime flag in the 16th century, as a regimental flag in Denmark’s army in 1785, and became the official flag of the entire army in 1842.

The southern neighbor of Denmark, a Scandinavian country in Northern Europe, is Germany, and its eastern neighbor is Sweden. Denmark is separated from Sweden by the Sont Strait, a narrow gorge.

Denmark is located in northern mainland Europe, just south of Norway. It shares its only land border with Germany to the south, and Sweden lies to the east across the Kattegat Sea. The two countries are only separated by 4 km (2.48 mi) at their closest points.

Aside from having the world’s oldest flag, Denmark has several other claims to faim: it is the birthplace of the Lego toy brand, it has an impressive and well preserved architectural heritage, and the country is known to be welcoming to tourists. These are just a few of the many reasons to visit Denmark.

Denmark is also one of the greenest countries in the world — bicycles are a popular form of transport, and it leads the region in renewable energy sources. Copenhagen has been ranked as the world’s most bicycle-friendly city since 2015.

As the capital of Denmark, Copenhagen is the largest and most populous city. There are five different administrative regions of Denmark, and these are further divided into 98 municipalities.

The rich, well-designed and extensive architectural heritage of Denmark has preserved its history quite well. Copenhagen is sometimes referred to as “the city of spires” for the spires that accentuate the otherwise horizontal skyline.

With a high standard of living, Denmark is a highly developed nation economically and socially. It is a member of NATO, the United Nations, the European Union, and the Schengen area, and it maintains close relationships with the other Scandinavian countries.

Although it has been an EU member state since 1973, the Danish currency has remained in use — Denmark uses the Danish Krone. The country has a powerful economy and is ranked as having the 10th most competitive economy in the world according to the World Economic Forum.